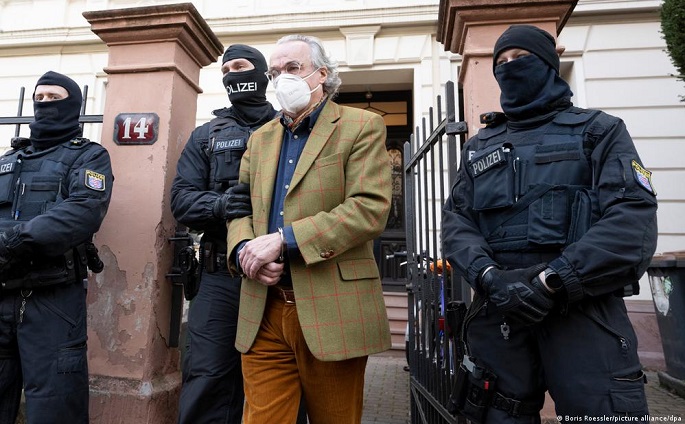 As investigators comb through evidence collected in raids targeting a far-right plot aiming to topple the German government, officials are indicating that the number of people involved could grow, reported DW, quoting news agencies dpa, Reuters and AFP.

The head of Germany's criminal police (BKA), Holger Münch, said Thursday that two more individuals were found to be connected to the anti-government plot, bringing the total number of suspects to 54. The number of suspects could continue to grow, he told the ARD public broadcaster.

Münch said other people had been "identified" and police were working to determine their status in relation to the network. At least 25 people have been arrested so far in connection with the plot.

"You can't say that a group comprising a two-digit or perhaps small three-digit number of people was in a position to truly put the German state system in doubt, let alone shatter it," Münch said.

"But we do have a dangerous mixture of people here, following irrational convictions, some of them with a lot of money and others in possession of weapons, and with a plan that they do want to carry out," Münch said. "And that does make it dangerous and that's why we have now intervened and put up a clear 'stop' sign."

He said this involved conducted arrests, carrying out searches, widening the investigators' net further and trying to get an even clearer picture of the group and the plot's capabilities.

Prosecutors had said on Wednesday that the plotters' "aim" was to overthrow the government, and that they were willing to use violence and even murder to achieve it; but they had said less about how viable or advanced the plot was.

Wednesday's search operation is reported to have covered 150 properties in 11 German states. Weapons were found at more than 50 of the properties searched, Münch had said Wednesday evening. The network is connected to the far-right "Reichsbürger" movement, a loosely connected group that has called for the dissolution of the German state and government.

The interior minister of Germany's Thuringia, Georg Maier, told DLF broadcaster on Thursday that more arrests were "expected" after police had time to process and analyze evidence seized during the raids, including cell phones.

Germany's far-right scene has a strong presence in the eastern state, which is home to a hunting lodge owned by suspected Reichsbürger ringleader, Heinrich XIII Prince Reuss, and which is now the scene of an investigation. The 71-year-old Reuss, who comes from an aristocrat family, was arrested at his house in Frankfurt on Wednesday.

Maier added that the far-right party Alternative für Deutschland (AfD) had provided a forum for anti-government rhetoric in Thuringia, and elsewhere.

"The AfD has become more and more radicalized. It spreads these conspiracy fantasies and fantasies of overthrowing [the government]," Maier said. The AfD is already being monitored in Thuringia for suspected "anti-constitutional" activities.

The suspects targeted by the Federal Public Prosecutor's Office's investigation include a soldier from the German Armed Forces' Special Forces Command (KSK) and several Bundeswehr reservists.

In the western state of North Rhine-Westphalia, state premier Hendrik Wüst said in an interview with DLF that it was very concerning that people with military training or access to weapons were involved in the suspected terror network.

However, he added that the raids were a sign that the German state is capable of defending itself, and he expects more action to be taken targeting the Reichsbüger movement.

BKI head Münch added that more background checks should be carried out on members of security forces.

"In times like these, when security forces are very much in demand, we must be able to rely on the fact that everyone stands behind the democratic order," he told the ARD public broadcaster

The head of Germany's domestic intelligence services, Thomas Haldenwang, also called for increased security checks of anyone working in state or federal security forces, adding, however, that the vast majority of police and security forces do not harbor anti-government sentiments.

In recent years, the growing number of Reichsbürger has alarmed German security authorities. In its June 2022 report, the domestic intelligence service estimated that around 21,000 people belong to this scene.

Speaking to ARD on Thursday, Haldenwang said that out of this 21,000, around 10% are assessed to be oriented towards violence.

"Here, for the first time, you have the situation where there was nationwide networking with very concrete plans. There were plans to actually implement an overthrow of the government," he said.