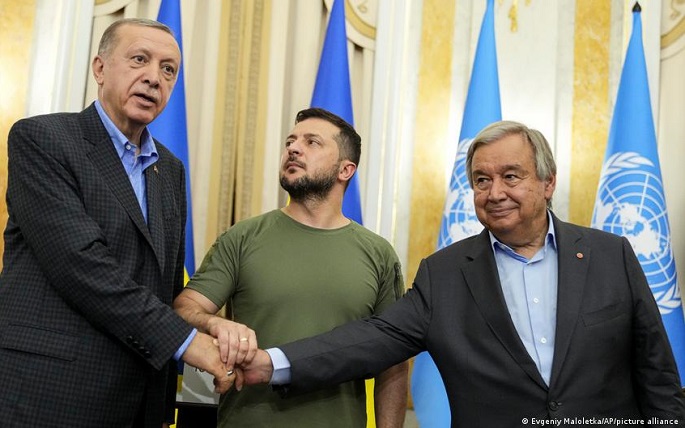 "The UN must ensure the security of this strategic object, its demilitarization and complete liberation from Russian troops," Zelenskyy said in a statement after meeting Guterres in the western Ukrainian city of Lviv.

Guterres said he was "gravely concerned" by the situation in and around the plant.

"The facility must not be used as part of any military operation. Instead, agreement is urgently needed to reestablish Zaporizhzhia's purely civilian infrastructure and to ensure the safety of the area," he said.

"We are worried. We do not want another Chernobyl," the Turkish leader said.

The meeting comes a day after the head of NATO said it was "urgent" that the UN's nuclear watchdog be allowed to inspect the Zaporizhzhia nuclear power plant.

Moscow and Kyiv have accused each other of shelling the complex, and the fighting has raised fears of a nuclear catastrophe.

Zelenskyy and Guterres agreed on arrangements for an IAEA mission to the plant, the Ukrainian president's website reported.

But Moscow has so far dismissed UN proposals on Zaporizhzhia. Russia's Foreign Ministry spokesman Ivan Nechaev on Thursday said the UN calling for the demilitarization of the area around the Russian-occupied nuclear plant was "unacceptable."

At the same time, Russia's Defense Ministry has denied deploying heavy weaponry at the plant.

The Russian control of Zaporizhzhia, Europe's largest nuclear power station, has sparked concerns about a possible nuclear accident should fighting occur there.

What else was on the agenda?

Thursday's talks also tackled grain exports and sounding out options for a potential diplomatic solution to the war in Ukraine on the agenda.

Guterres urged Russia and Ukraine to continue "the spirit of compromise" in implementing a UN brokered deal that enabled Ukraine to resume grain exports from its Black Sea ports.

"Since the Russian invasion of Ukraine, I have been clear, there is no solution to the global food crisis without ensuring full global access to Ukraine’s food products and Russian food and fertilizers," he told reporters.

Zelenskyy said and Guterres agreed to continue working on implementing the deal.

The Ukrainian leader also spoke about the issue with his Turkish counterpart. He said in another statement that he and Erdogan discussed "the possibility of improving the grain initiative."

Last month, Turkey helped the UN helped broker the agreement clearing the way for Ukraine to export 22 million metric tons of corn and other grain stuck in its Black Sea ports since Russia began its invasion on February 24.

So far, the grain deal seems to be holding, with the Turkish Defense Ministry saying  622,000 tons of grain have been shipped from Ukraine's Black Sea ports.

Before three leaders met, Zelenskyy held bilateral talks with Erdogan, who was on his first trip to Ukraine since the war started.

Ankara, with its strong ties with both Moscow and Kyiv, has had a key role in diplomatic efforts throughout the war.

Turkey insists the war in Ukraine should be resolved through diplomatic channels.

"We are ready to act as a facilitator or mediator towards the goal of reviving the negotiations over the parameters that took form in Istanbul," Erdogan said.

DW correspondent in Istanbul, Julia Hahn, said the war has put Turkey in a difficult position,noting how dependent Ankara is on Russia in the areas of energy, trade and tourism.

"What the Turkish leader has been trying to do is turning this challenge into an opportunity, where he is now emerging as the man everybody has to talk to when it comes to this war, this conflict," Hahn added.

But Erdogan told reporters that NATO member Turkey remained firmly on Ukraine's side.

"While continuing our efforts to find a solution, we remain on the side of our Ukraine friends," Erdogan said.

"The visit of the President of Turkey to Ukraine is a powerful message of support from such a powerful country," Zelensky said.