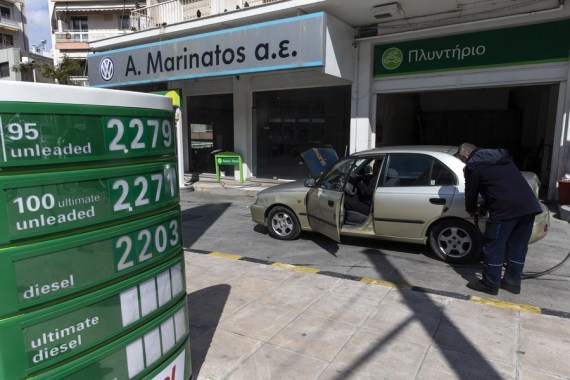 Gasoline and diesel prices are displayed at a gas station in Athens, Greece, on March 11, 2022. File Photo: Xinhua.

Greek Prime Minister Kyriakos Mitsotakis announced on Tuesday the extension of a subsidy for fuel consumption for the next three months, to ease the burden on budgets of households and businesses amid the ongoing international energy crisis.

Consumers who received 35 to 55 euros (37-58 U.S. dollars) for consumption of gas for cars and motorcycles in the second quarter of this year, will now receive 60-100 euros for July until October, Mitsotakis said during a cabinet meeting.

More motorists will also be eligible for the subsidy, with income criteria thresholds changing to include the middle classes.

The sum includes subsidies for electricity consumption for households and businesses, and a program to be launched in the coming days to help consumers replace 400,000 old electrical appliances, such as air conditioners and refrigerators, with energy-efficient ones.

The increase was attributed mainly to the rise in energy costs over the past year.

Natural gas prices increased by 172.7 percent compared to a year ago, and electricity prices by 80.2 percent, ELSTAT said.

Fuels and lubricants prices increased by 36.6 percent compared to May 2021, according to the official data.