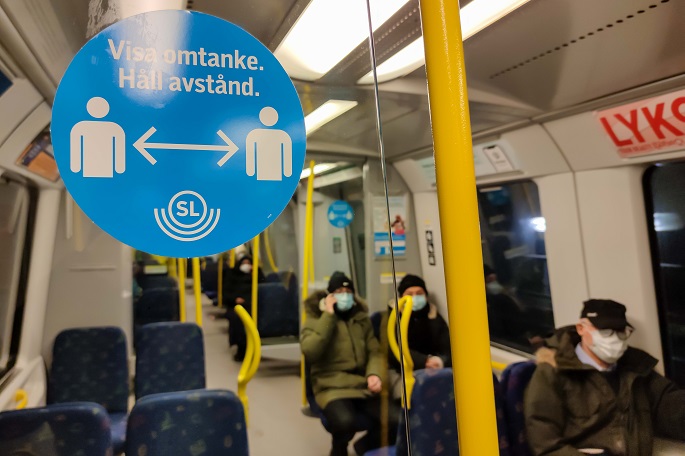 A blue sign reminding people to keep a distance is seen in a subway train in Stockholm, Sweden, on Feb. 10, 2021. File Photo: Xinhua

The Omicron variant is spreading fast in Sweden, where the Public Health Agency on Thursday warned that record numbers are to be expected this month, reported Xinhua.

"We have a very rapid increase in the spread of infection that we have not been close to before," State Epidemiologist Anders Tegnell said at a press conference.

In the first scenario he presented, 69,000 infections per day can be expected towards the end of January -- compared to the current 24-hour high of 25,000 infections. The number of infections among the population of 10.4 million would increase by almost 1.1 million in the second half of January, pushing the cumulative number of cases to 2.6 million. Currently, this total stands at just over 1.5 million.

The other, more optimistic scenario Tegnell described would see 47,000 new infections per day, which would still mean a four-fold increase compared with the worst day on record until late December last year, and a total of 2.3 million infections by the end of the month.

In both scenarios, Tegnell said, the number of hospitalizations would also increase, at a time when many hospitals around the country are already close to capacity.

However, the daily number of confirmed infections is expected to drop off rapidly by mid-February, to under 10,000 new cases per day.

With an increasing number of Swedish people reporting symptoms, demand for testing has dramatically increased. In one area of Stockholm, people queued for five hours for testing on Wednesday, Radio Sweden reported. One of Sweden's regions has also started flying test kits to Germany to be analyzed.

Despite evidence that COVID vaccines do not completely protect against the Omicron variant, Tegnell urged the 1.2 million Swedes who have not already had their first jab to roll up their sleeves. Vaccines have "a very important role in protecting against hospitalization and serious illness," he said.

According to the Public Health Agency, the cumulative number of COVID-19 deaths in Sweden was approaching 15,500 on Thursday.