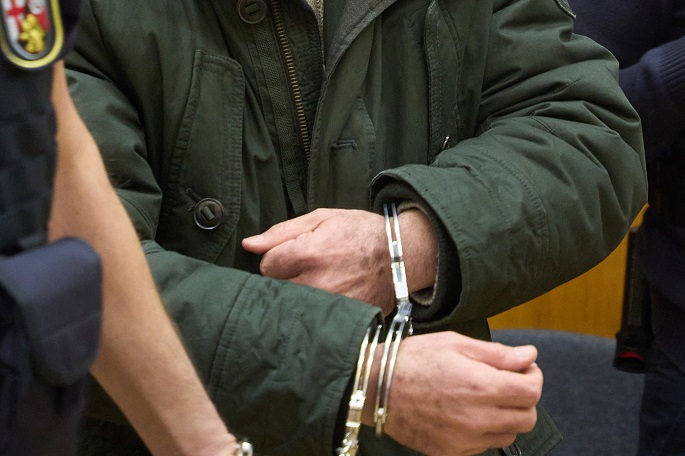 Syrian Anwar R. arrives in handcuffs to the courtroom of the Higher Regional Court for the pronouncement of the verdict. File Photo: Thomas Frey/dpa.

A former Syrian colonel was convicted of crimes against humanity and sentenced to life in prison by a German court in Koblenz on Thursday, in what prosecutors said was the first trial of its kind worldwide.

The former intelligence officer and interrogator, identified only as Anwar R, was tried in Germany under the principle of universal jurisdiction, which allows the prosecution of possible war crimes committed by foreigners in other states.

The defendant was accused of crimes against humanity in 2011 and 2012, in the early stages of the Syrian civil war.

"The prisoner was sentenced to life imprisonment for murder, torture, aggravated deprivation of liberty, rape and sexual assault," the Higher Regional Court in Koblenz stated in a press release.

He was convicted of hostage-taking in two cases and sexual abuse of prisoners in three cases.

The landmark trial into state-sanctioned torture began in April 2020, with two defendants in the dock.

In February 2021, the younger co-defendant was sentenced to four and a half years in prison for aiding and abetting a crime against humanity.

Anwar R, 58, throughout the trial denied committing torture or giving instructions for others to commit torture.

His lawyers argued that he had tried to help Arab Spring demonstrators get out of jail, and sympathized with the opposition to Syrian President Bashar al-Assad. Judges rejected his arguments, however.

The conviction was a "historic decision" and an "important signal" against impunity, said rights group Amnesty International.

Amnesty expected that, following Thursday's ruling, "further trials will be brought in Germany and in other states in accordance with the principle of universal jurisdiction."

"The verdict .... will not fix the broken heart of every mother whose son was killed under torture," former Syrian prisoner Omar Alshogre told dpa.

Alshogre was detained when he was 17 and was kept in a prison in Damascus - not the one where Anwar R worked - until he was 20. He is now resident in Sweden.

"Nor will [the verdict] even represent a fraction of the pain we had to endure. But it repairs our hope that the regime will fall and our freedom will come," he said.

The closely watched trial could set a precedent for future trials of Syrian officials who committed crimes during the civil war.

“Despite all the shortcomings of international criminal justice, Anwar R’s conviction shows what the principle of universal jurisdiction can achieve – and that such trials are in fact feasible in Germany and Europe,” said Wolfgang Kaleck, general secretary of the independent rights group the European Center for Constitutional and Human Rights (ECCHR).

Ruham Hawash, who was a joint plaintiff in the case against Anwar R, was cited by ECCHR as saying the verdict “is important for all Syrians who have suffered and are still suffering from the Assad regime’s crimes."

"This verdict is only a beginning and we have a long way to go – but for us affected people, this trial and today’s ruling are [sic] a first step towards freedom, dignity and justice,” he said.