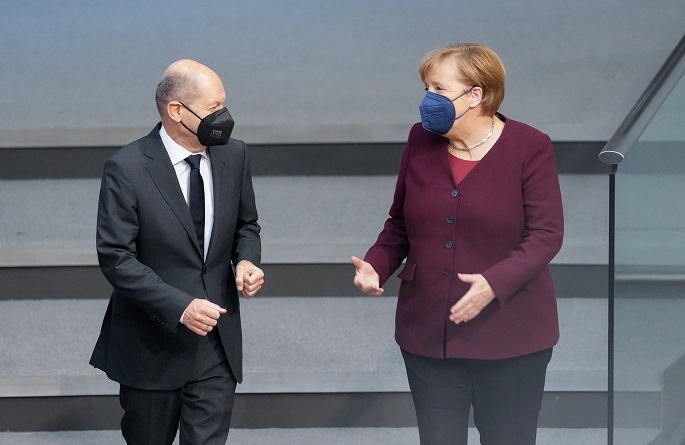 During 16 years in power, Angela Merkel has made decisions that have touched the lives of every German, and many others besides, reported dpa. Here are some of her key moments as chancellor:

March 2007: Merkel achieves a major legislative victory as parliament agrees on a gradual lifting of the retirement age from 65 to 67.

June 6-8, 2007: Merkel hosts the first G8 summit, with Africa and climate change at the top of the agenda.

October 5, 2008: Merkel promises Germans that their savings are secure three weeks after the collapse of Lehman Brothers and the start of the financial crisis.

Mar 5, 2010: Merkel declares there is "no alternative" to helping Greece avoid bankruptcy, putting Europe's biggest economy fully behind efforts for financial aid that would total hundreds of billions of euros.

March 14, 2011: As a response to Merkel's decision to turn against nuclear power in the wake of the disaster at Fukushima, parliament votes to end all nuclear power generation by 2022.

October 24, 2013: "Spying on friends is totally unacceptable," Merkel says, after reports that the US NSA intelligence service had access to her mobile phone.

May 25, 2014: The far-right Alternative for Germany enters the European Parliament for the first time; soon they achieve representation in all 16 German federal states and the national parliament.

February 12, 2015: In Minsk, Merkel and the leaders of France, Ukraine and Russia agree on a ceasefire and a roadmap towards peace. A shaky truce still exists today, but lapses regularly.

August 31, 2015: Merkel says "We can handle it," in response to an influx of refugees from the Middle East. The decision to keep German borders open at the beginning of the European refugee crisis becomes one of her defining moments.

December 19, 2016: An Islamist attacker drives a truck into a busy Christmas market in the heart of Berlin, killing 12 people. It is the worst of a spate of Islamist attacks.

March 17, 2017: A handshake that never happened was a bad start to a visit by Merkel to Donald Trump's White House. Germany's ties with the US remain frigid throughout the Trump presidency.

June 30, 2017: The German parliament approves gay marriage and adoption by same-sex couples. Merkel votes against the motion, but allows her party members a free vote.

October 29, 2018: With the government and her Christian Democrats (CDU) under mounting pressure from other political parties, Merkel announces she will give up the leadership of the CDU but stay on as chancellor until the end of her term.

March 18, 2020: Merkel makes a televised address urging people to take the coronavirus pandemic seriously. Germany is now into its fourth major wave of Covid-19 infections, and has experienced multiple lockdowns.

August 15, 2021: The fall of Afghanistan to the Taliban calls into question 20 years of international efforts to shore up the government there. Merkel's Foreign Minister Heiko Maas takes much of the direct criticism.

September 26, 2021: Merkel's conservative CDU - led by Armin Laschet - suffers its worst-ever result in national elections, losing out to the Social Democrats who go on to form a coalition government.

November 15, 2021: After staying out of the international limelight following the election, Merkel makes a rare intervention and calls Belarusian leader Alexander Lukashenko to discuss a migrant border crisis.

December 2, 2021: Merkel and state leaders decide on new national restrictions to combat a fourth wave of the coronavirus pandemic, in her last major policy announcement as acting chancellor. She is also given a formal military farewell on this date by the Bundeswehr.