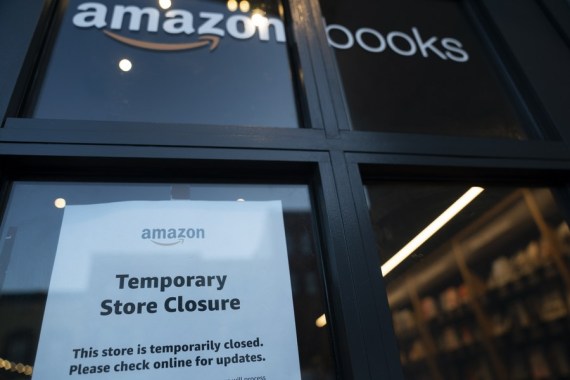 Photo taken on May 7, 2020 shows a window of a temporarily closed Amazon bookstore in Washington D.C., the United States. File Photo: Xinhua.

Alleging "unfair collusion" in the deal regarding prices and competition among Amazon sellers of Apple and Beats products, the Competition and Market Guarantor Authority, best known by its Italian-language initials AGCM, fined the companies a combined total of 203.2 million euros. The AGCM also ordered the companies to end their agreement or face further sanctions.

Beats headphones are produced by Apple, the computer and smartphone maker, and are for sale via online retailer Amazon.

Apple bore the brunt of the fines at 134.5 million euros, with Amazon hit with the remaining 68.7 million euros in penalties.

In a statement, the AGCM said the 2018 agreement between the companies blocked most third-party sellers from listing Apple and Beats products on Amazon's Italian site. It said the companies allowed to sell the product on the site were "chosen individually and in a discriminatory manner" that was in "clear violation" of Article 101 of the Treaty on the Functioning of the European Union.

"The terms of the agreement also restricted cross-border sales, as retailers were discriminated against on a geographic basis," the statement said. "The restrictions of the agreement have affected the level of discounts offered by third parties on Amazon" in Italy.

According to Italian media reports, both companies said they would appeal against the decision. Amazon called the fine levied against it "disproportionate and unjustified." Apple, meanwhile, said the agreement in question was aimed at assuring customers received actual Apple and Beats headphones.