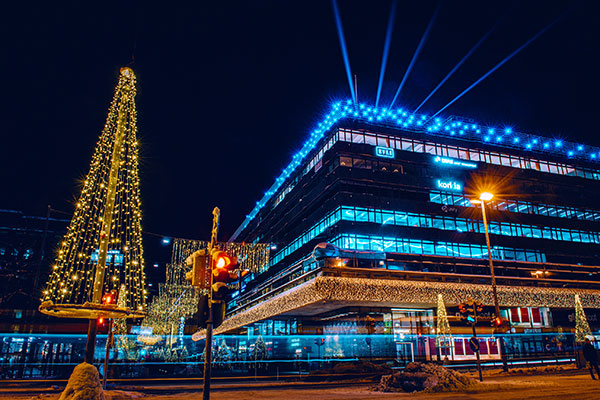 About 120,000 people visited the Lux Helsinki event held from January 5-9 using light art to create a magical atmosphere in the snow-covered, said the City of Helsinki in a press release on Tuesday.

Adhering to safe distances, light art brought joy to all corners of the city, with a total of 24 works spread from the city centre all the way to Kannelmäki and Vuosaari.

The traditional communal walking route had to be discarded and works were both moved and cancelled just a week before the event to ensure that the public were guaranteed a safe experience with adequate distances in the current coronavirus situation.

Organised for the second time as part of Lux Helsinki, Lux Korkeasaari attracted a record crowd to look at light art and animals, which resulted in around 30,000 euro donated to the conservation work of endangered snow leopards.

“Instead of Lux Helsinki being viewed during one night, it became a multi-night urban orienteering experience for many people. Ultimately, this was a very fitting way to cheer up Epiphany weekend with its many restrictions,” said Stuba Nikula, CEO of Helsinki Events Foundation, the organiser of Lux Helsinki.

This year’s Lux Helsinki routes had to be planned and tailored by the residents themselves, and many used the event to visit locations in the city they had not seen before.

There were almost as many Lux Helsinki experiences as there were visitors: the event’s social media channels told tales of people enjoying light art on ice, in trams, on skis, in a minivan rented with neighbours as well as on sledges and snowboards.

Even though many missed the pre-planned route and festival-like experience, a recurring theme in audience feedback was a feeling of empowerment and hope brought by experiencing light art during this difficult time.

One of the most beloved works at Lux Helsinki was the Swiss artist Dan Acher’s Borealis, which conjured northern lights above the Olympic Stadium.

The breathtakingly beautiful work, constantly changing with the weather and wind, almost made one lose one’s sense of time and place in the stadium. Thousands of images and video clips of the work, glowing in shades of blue, red and green, were shared on social media during the event.

“Light art emphasises beauty, and it is delightful that this most important aspect of art once again brought unforgettable memories to the people of Helsinki. Even now, Lux managed to combine topical works of art and the urban environment to create a joyful yet surprising experience,” Nikula added.