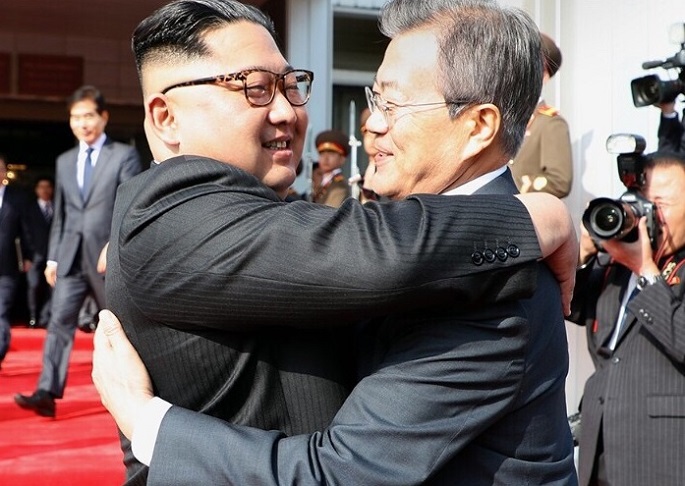 South Korean President Moon Jae-in (R) and top leader of the Democratic People's Republic of Korea (DPRK) Kim Jong Un hold their second summit at the DPRK side of the border village of Panmunjom, on May 26, 2018. File Photo Xinhua.

South Korea ( Republic of Korea-ROK) and the Democratic People's Republic of Korea (DPRK) have opened a joint liaison office Friday for round-the-clock communications between the two sides.

The opening ceremony was held at about 10:50 a.m. local time (0150 GMT) outside the liaison office building in the DPRK's border town of Kaesong, according to a pool report from South Korean reporters.

About 50 government officials and experts from the two sides attended the ceremony, including officials in charge of inter-Korean affairs and experts on the Korean Peninsula affairs.

The office was a follow-up measure on the agreement reached by South Korean President Moon Jae-in and DPRK top leader Kim Jong Un after their first summit on April 27 at the border village of Panmunjom.

The two leaders agreed to hold their third summit in the DPRK's capital Pyongyang for three days from Sept. 18.

"(The joint liaison office) is a symbol of peace created by both the South and the North," South Korean Unification Minister Cho Myoung-gyon said in a congratulatory speech.

Cho said the office will become a round-the-clock communications channel between the two Koreas under a new era of peace.

"It is more meaningful to launch the joint liaison office ahead of the historic summit meeting in Pyongyang between the leaders of the North and the South," said Ri Son Gwon, chairman of the Committee for the Peaceful Reunification of the Fatherland (CPRF) of the DPRK in charge of inter-Korean affairs.

Cho and Ri signed an agreement on how to run the joint liaison office at a meeting room on the third floor of the four-story building. South Korean and DPRK officials would use the second and fourth floors each of the building.

South Korea will station some 20 officials in the office, while the DPRK will deploy a similar number of officials there.

South Korean Vice Unification Minister Chun Hae-sung will serve as a co-chief of the office, together with Jon Jong Su, vice chairman of CPRF of the DPRK. The co-chiefs will visit the joint liaison office once a week for a regular meeting.

In the office, the two sides were expected to discuss issues on inter-Korean cooperation, including ways to modernize and connect roads and railways of the two Koreas, in accordance with a progress in talks for the denuclearization of the Korean Peninsula.

In addition to it, South Korea and the DPRK would discuss various peninsula issues through the liaison office channel as it is open 24 hours a day and 365 days a year.

"(The joint liaison office) is an inter-Korean channel that opens 24 hours a day and 365 days a year," Moon Chung-in, special advisor to the South Korean president for unification, foreign affairs and national security, told a press conference with foreign correspondents here Thursday.

The special advisor called the office a "very positive change and development" in inter-Korean relations as South Korea can directly approach the DPRK at any time.

Kim Eui-keum, spokesman for the South Korean presidential Blue House, told reporters earlier in the day that it will become a strong bridge linking the two Koreas under the still uncertain situations on the peninsula.

The spokesman said the picture of the officials from South Korea and the DPRK harmoniously staying in the same office was anticipated to spread to the entire peninsula.