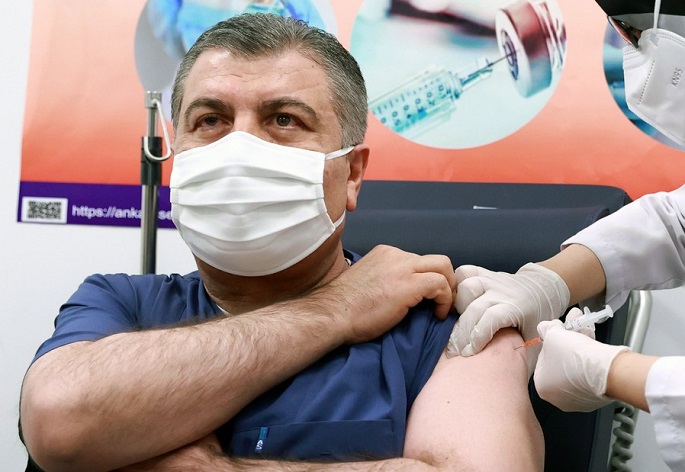 They received the first shots on live television shortly after the vaccine was granted emergency authorization in Turkey.

Turkey will begin mass vaccination on Thursday, starting with health workers, Koca told reporters. He called on all citizens to get vaccinated, saying "now there is a light at the end of the tunnel."

Vaccination of senior leaders of the country will set an example for the citizens, he added.

The vaccination program is carried out in a transparent manner and each person will be assigned vaccine shots by name with a barcode, Koca said.

People who will be vaccinated in accordance with the procurement plan will be notified when it is their turn and will go to get their vaccination by appointment, the minister said.

Turkey on Wednesday started to give appointments for health staff to be vaccinated primarily.

The Turkish Medicines and Medical Devices Agency said Wednesday it had authorized the emergency use of the vaccine, known as CoronaVac, following tests that lasted for 14 days.

"While evaluating the scientific data, samples that were delivered to our country have been examined in our institution's laboratories over 14 days," said the agency.

Turkey reported on Wednesday 9,554 new COVID-19 cases, including 971 symptomatic patients, as the total number of positive cases in the country reached 2,355,839, according to its health ministry.

The rate of pneumonia in COVID-19 patients stands at 4.5 percent and the number of seriously ill patients is 2,652 in the country, said the ministry.

In December, Turkey said CoronaVac showed a 91.25-percent efficacy based on an interim analysis of a Phase III trial of the vaccine.