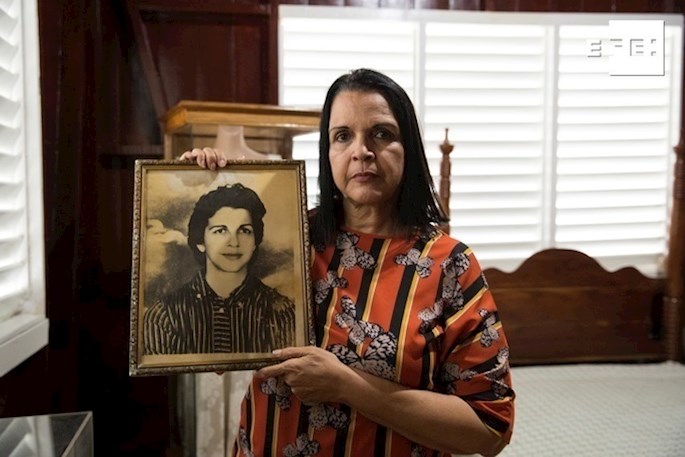 Minou Tavarez Mirabal, daughter of two slain heroes in the struggle six decades ago against Dominican dictator Rafael Leonidas Trujillo, Minerva Mirabal and Manolo Tavarez, poses with a portrait of her mother during an interview with Efe on 19 November 2020 at the Mirabal Sisters House Museum in Salcedo, Dominican Republic. Photo: EPA-EFE/Orlando Barria.

Three sisters who were murdered 60 years ago for daring to defy Dominican dictator Rafael Leonidas Trujillo remain a powerful symbol of the struggle against gender violence, a scourge that continues to claim the lives of women around the world.

Patria, Minerva and Maria Teresa Mirabal, a trio of political activists aged 25 to 36 who were married with children and known as Las Mariposas (The Butterflies), were brutally beaten and killed along with their driver, Rufino de la Cruz, on the night of Nov. 25, 1960, when they were returning home after visiting their jailed husbands in the northern city of Puerto Plata.

The quadruple homicide was met with impunity but it precipitated the downfall of the long-ruling dictator, who was assassinated six months later (on May 30, 1961).

The United Nations in 1999 honored the Mirabal sisters by designating Nov. 25 as International Day for the Elimination of Violence against Women, while in their homeland they are viewed as icons of the struggle against gender violence.

"It's important they not be forgotten because the struggles of women are invisible. They tend to be erased, hidden, ignored, shrouded in secrecy," said Minou Tavarez Mirabal, daughter of Minerva and Manolo Tavarez Justo, a national hero and leader of a group - the 14th of June Movement, made up of Dominican exiles - that carried out a failed expedition to topple Trujillo in 1959.

If the example of these anti-Trujillo activists "serves to avoid the death of even just one woman in the world, I imagine my mom would say, 'it was worth it,'" the former lawmaker added in an interview with Efe at the Mirabal Sisters House Museum in Salcedo, capital of a north-central Dominican province now known as Hermanas Mirabal.

Ironically, however, the presidential candidate of the small Alliance for Democracy party in the 2016 general election said the murders do not strictly qualify as instances of gender violence.

Trujillo ordered the killings because the Mirabal sisters had organized "the largest opposition movement he had confronted in the 31 years of his dictatorship" from 1930-1961, she said.

The perpetrators of that horrific crime were sentenced to between 20 and 30 years in prison in a "historic" 1962 trial, Minou recalled, though she noted that "they were released two years later" and provided with state protection.

She also lamented the impunity surrounding the murders of her father, Tavarez Justo, and other 14th of June Movement members, who were killed in a 1963 "crime of state."

"There can be no democracy without justice," said the ex-lawmaker, who along with her brother and cousins was forbidden by their grandmother from speaking about those responsible for the quadruple murder.

The mother of Las Mariposas "said those names were never to be mentioned because they would sully the memory" of the three slain women, Tavarez Mirabal said.

But 60 years later she wonders if that attitude might have been mistaken.

"Maybe that's the root of the impunity that's covered over all the horror throughout the history of the Dominican Republic," she said, adding that the country has been mired in a long "reign of impunity."

The Mirabal sisters' childhood home, where they took refuge from political persecution in the final months of their lives, was converted in 1994 into the Mirabal Sisters House Museum, where their remains and those of Tavarez Justo are kept.

Their dresses, beds, furniture, as well as Minerva's typewriter and Patria and Maria Teresa's sewing machines, remain intact thanks to the care of their mother and then later Dede, the only surviving sister, who passed away in 2014.

Most of the visitors are students who learn about the "struggle of a generation who gave their lives to bring about democracy, to end the dictatorship, so the rights of Dominican men and women would be respected, so we would have a better life," Tavarez Mirabal said.

Since Dede's death, the House Museum now is managed by the children of the Mirabal sisters.

But although their struggle and untimely deaths are commemorated every Nov. 25 in their homeland, Tavarez Mirabal said "speeches, statements and tributes" are not enough to put a halt to violence against women.

"It's clear a change is needed. It's not enough for the Attorney General's Office to come and say that the number of victims is fewer or greater ... the goal should be that there are none at all, that no woman is killed because she's a woman," she said.