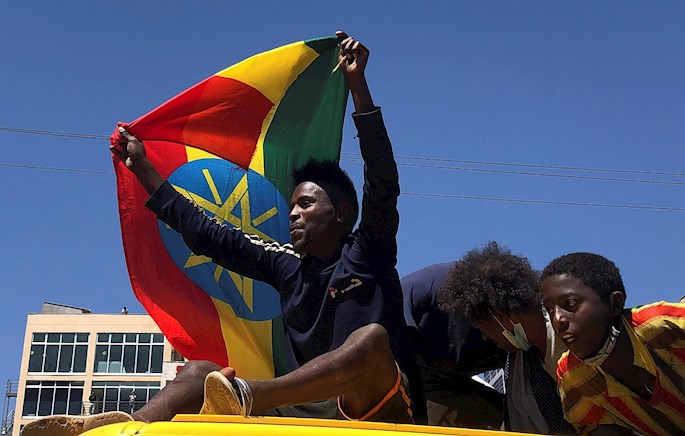 Ethiopians celebrate the military and carry Amhara flags and Ethiopian national flags in the streets after a national call to stand in honour of the Ethiopian National Defence Forces, Addis Ababa, Ethiopia 17 November 2020. File Photo: EFE/EPA.

At least 600 civilians were killed on Nov 9 in an attack by forces loyal to the Tigray Liberation Front (TPLF), the party that governs the region and against which the Ethiopian government launched a military offensive five days earlier, the Ethiopian Human Rights Commission (EHRC) said Tuesday, reported EFE-EPA.

The massacre took place in the Tigrigna town of Maikadra. Most of the victims were men from the Amhara and Wolkait ethnic groups, who were separated from the rest of the population by the attackers, said the EHRC, an independent human rights institution, in a preliminary report on the massacre.

"While it is not yet possible to verify the exact number of dead, physically injured and/or those who suffered material damage, members of the Burial Committee, established after the attack, eye witnesses and other local sources estimate that at least 600 (civilians) have been killed," the EHRC said.

"And they say the number is likely to be even higher," the committee said, noting that the number of dead was so high that "the burial took three days" in Maikadra, a rural town in Ethiopia's Tigray region (north) near the border with Sudan.

Days before the attack, when the Ethiopian Army was approaching the town of 40,000 to 45,000 inhabitants (mainly Tigrayans, Amharas and Wolkaits), police and a local militia sealed off all exits from the town.

DEATHS BY STABBING AND STRANGULATION

They also let women and children of Tigrinya origin march before the massacre, perpetrated on November 9 from 3pm  that day until early the next morning, before the Ethiopian Army entered the city.

The massacre was largely the work of the Samri youth movement, linked to the TPLF, which killed its victims by beating “them with sticks, stabbing them with knives, machetes and hatchets and strangling them with ropes”.

Although several Samri groups perpetrated the massacre, "the police and the militia (...) helped and directly participated in the carnage by shooting those who tried to escape," the report said.

"Maikadra's attack is not a simple criminal act, but a serious premeditated and carefully coordinated violation of human rights," the Commission noted.

In its opinion, these "serious human rights violations" may constitute “crimes against humanity and war crimes.”

The EHRC based its report on the investigations of a team of experts it sent to the area and collected testimonies and evidence from victims, eyewitnesses, families of victims, relief workers, military personnel and other sources, including government authorities present at the time of the visit.

The team also visited hospitals and health centers and spoke with survivors and other relevant authorities.

The human rights organization Amnesty International (AI) warned of this massacre on November 12, although it did not specify the number of victims and only indicated at the time that there were "probably" hundreds.

"It is now an urgent priority that the victims receive reparation and rehabilitation, and that the perpetrators involved directly or indirectly at all levels are held accountable before the law," EHRC Chief Commissioner Daniel Bekele told Efe on Tuesday.

"The unimaginably heinous crime committed against civilians for no other reason than their ethnicity is heartbreaking. However, we are comforted by the stories of Ethiopians who saw beyond ethnicity to come to the aid of their countrymen in times of need. These stories keep alive the hope of a return to peaceful coexistence," Bekele added.

The Prime Minister of Ethiopia, Abiy Ahmed, announced on Sunday a third and "final" phase of the offensive of the Ethiopian Army to take the capital of Tigray, Mekele, and overthrow the TPLF, which he gave 72 hours to lay down its arms, a deadline that will fall on Wednesday.

Tigray, an isolated region on the border with Eritrea and Sudan, has since the start of hostilities had its telecommunications cut off by the central government in retaliation for a TPLF attack on an Ethiopian army base in the region.

This isolation makes it very difficult to verify information from either side on the ground.

For the moment, Abiy, winner of the 2019 Nobel Peace Prize, has ignored international calls for a halt of hostilities and refuses to negotiate with the TPLF to resolve the crisis, which has caused hundreds of deaths and an exodus of more than 40,000 Ethiopians to Sudan.

The dispute between Tigray and the federal government had been escalating for months, with the indefinite delay of the general elections due to be held last August in Ethiopia serving as a flashpoint.

After the delay of the elections because of Covid-19, the TPLF in September held its own parliamentary elections, which the central government labeled as illegal.

On the other hand, the government of Tigray does not recognize any authority of the federal Ethiopian government because Abiy's mandate theoretically expired on Oct. 5.

The TPLF dominated the governing coalition in Ethiopia until the current prime minister came to power in 2018.