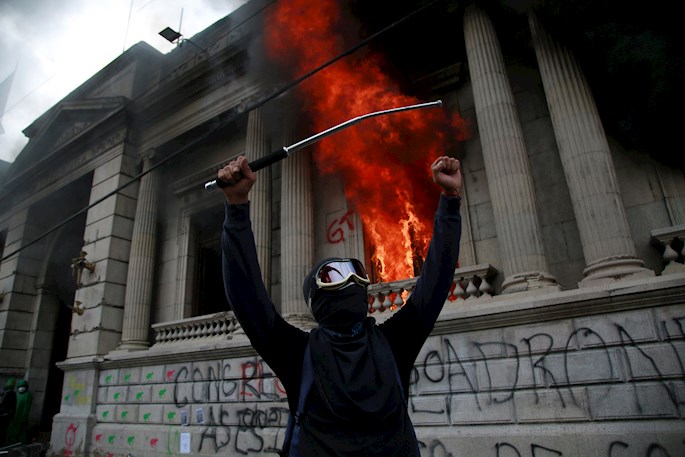 A man protests in front of the Guatemalan Congress in flames caused by protesters who protest against the Government of President Alejandro Giammattei in Guatemala City, Guatemala 21 November 2020. Photo: EPA-EFE/Esteban Biba.

Alejandro Giammattei in a series of rallies that culminated in the burning of a part of Congress and the dispersal of protesters with tear gas.

Aid agencies said at least half a dozen people have been treated for injuries, and dozens were affected by tear gas.

The call for the large demonstrations Saturday against Giammattei and the Guatemalan Congress came after the approval of the state budget for 2021 on Wednesday.

The budget has been described as "opaque" by experts after it was endorsed at dawn, with not all 160 lawmakers having access to it, and with extensive reductions in health and human rights issues.

A demonstration was called for the afternoon in front of the National Palace of Culture, the government headquarters located in the center of Guatemala City.

However, minutes before it began, approximately a kilometer away, hundreds of hooded protesters broke into Congress and set fire to several offices until they were evicted by security forces and fire brigades, who put out the blazes.

The protesters broke the entrance door to parliament, and windows, throwing flaming torches inside and advancing to destroy the facilities.

Lawmakers were not in Congress at the time, and the authorities have not released specific details about the damage caused by the fire and the protesters.

In front of the National Palace of Culture, and despite the COVID-19 risk, at least 10,000 Guatemalans gathered, unhappy with Giammattei and his government, which took office on Mar. 14.

"We are tired of corruption. We cannot take it anymore," one of the protesters, Luisa Rivera, told EFE.

The demonstration was held peacefully and without incident at first, but at the end of the afternoon it was broken up by tear gas fired by the National Civil Police.

The Guatemalan president took to Twitter, writing "you have the right to demonstrate in accordance with the law but neither can we allow [people] to vandalize public or private property."

"Whoever is proven to have participated in these criminal acts will fall under the full weight of the law," he wrote.

On Friday night, after Giammattei endorsed the budget again, his vice president Guillermo Castillo told reporters that the country is not "well" and urged Giammattei to present his resignation alongside him to "oxygenate" the Central American nation.

In Guatemala, one out of every two children suffers from malnutrition and 59 percent of its 16 million inhabitants live below the poverty line, according to official data. In addition, according to reports from international organizations, it is also one of the six most corrupt countries on the continent.