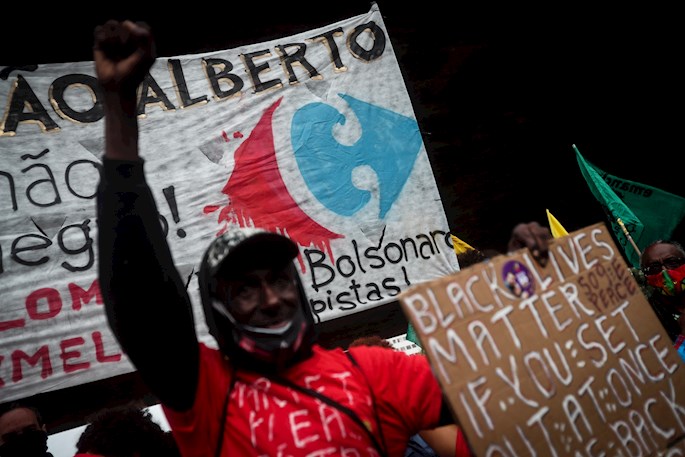 Thousands of people protest against racism after the murder of Joao Silveira, in front of the Sao Paulo Museum of Art (MASP), in Sao Paulo, Brazil, 20 November 2020. Photo: EPA-EFE.

Protests held across Brazil on Friday denounced the fatal beating of a Black man at the hands of two security guards at a supermarket, an incident that has drawn comparisons to the death of American George Floyd, reported EFE.

Welder João Alberto Silveira Freitas, 40, died on Thursday night after being beaten by two security guards outside the doors of a Carrefour supermarket, while an employee filmed the incident close by, in the southern city of Porto Alegre, on the eve of Black Awareness Day.

The beating, captured in photos and videos that were widely circulated on social media, shocked Brazil and sparked outrage.

However, the government of the country, through Vice President Hamilton Mourão, said that "there is no racism in Brazil."

Hours later, President Jair Bolsonaro said violence is a problem experienced "by everyone" and that "there is no point in dividing the suffering of the Brazilian people into groups."

"Those who instigate the people to discord, fabricating and promoting conflicts, attack not only the nation, but our own history. Whoever preaches this is in the wrong place. Your place is in the trash!" the president wrote on Twitter.

In São Paulo, hundreds of people gathered at the gates of the museum on central Paulista Avenue, from where they marched to one of the Carrefour stores in the area.

"The demand of the Black population is urgent. The dehumanization of Black people in Brazil is evident," and that is why "we have to take to the streets; to give visibility to our struggles," Alexandra Tulani, 38, told EFE.

"We want to have the right to exist. We do not want to go out on the street and suffer police violence. Yesterday a Black man was killed in a supermarket. That has to end and it has to end now," she added.

The phrase "The cheapest meat on the market is black meat," immortalized in a song by Brazilian samba singer Elza Soares, flooded social media networks and became the slogan of the protests Friday.

"It is a genocide of my brothers, my sisters, the Black population. That has to end. We are fed up with death. Whoever dies is Black, whoever is murdered is Black, the police kill Black people, society lives immersed in structural racism," Bruna Rodrigues told EFE.

As they marched through the streets of São Paulo, the protesters also held banners that read "Justice for João Alberto" and "Carrefour's hands are dirty with Black blood."

The march passed without incident, except for a small group that vandalized a Carrefour located on Calle Pamplona, next to Paulista Avenue. This small group was reprimanded by the bulk of the protesters.

In Rio de Janeiro, hundreds of people broke into a Carrefour in the Barra da Tijuca neighborhood shouting "murderers" and "racists will not pass." There they filled shopping carts to prevent the store from continuing to operate normally.

"It is an act of resistance, but we are tired of being resistance. We just want the opportunity to live," artist Ricardo Fernandes, 31, told EFE.

The attack on João Alberto has drawn comparisons to the death of George Floyd, who died in May at the hands of a White policeman, unleashing a wave of fury and racial justice protests throughout the United States, which spread to several European countries.

In videos and photos that circulate on social media, two guards hold João Alberto and repeatedly beat, kick and choke him. He cries for help and says he can’t breathe – a phrase Floyd also used.

The two security guards are reportedly in custody.

Asked about the case, the vice president of Brazil, Hamilton Mourão, lamented the death of João Alberto, but affirmed that it is not an episode of racial discrimination because "there is no racism in Brazil."

However, after the events came to light, various politicians, authorities, institutions and personalities condemned the "structural racism" that prevails in Brazil.

"We come across scenes of extreme violence that leave everyone outraged due to the excess of violence, which led to the death of a Black citizen in a supermarket," said the center-right Eduardo Leite, governor of the state of Rio Grande do Sul, of which Porto Alegre is the regional capital.

The leader of the Senate, Davi Alcolumbre, stressed that the incident "shows the need to fight against the terrible structural racism that corrodes" society.

For his part, the president of the Supreme Federal Court, Luiz Fux, stressed that "all violence is excessive and must be eliminated from society."

Although they represent 56 percent of the population, Black people in Brazil earn the least and suffer the most from unemployment.

According to data from the Atlas of Violence 2020, prepared by the Public Security Forum, 75 percent of homicide victims in Brazil in 2018 were Black.