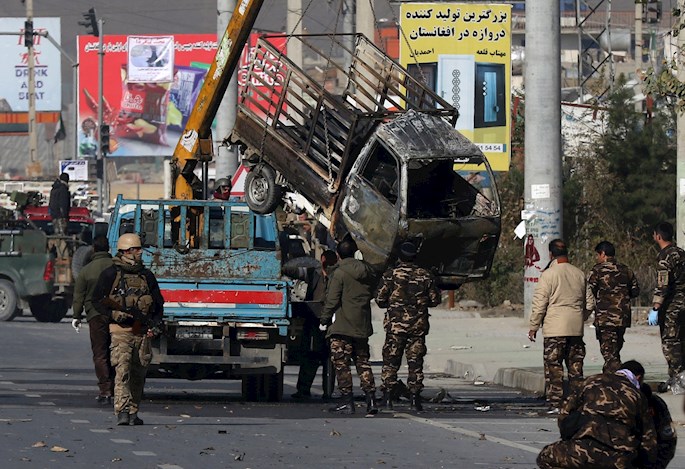 Security personnel inspect a damaged vehicle which was carrying and shooting rockets, in the aftermath of a rocket attack in Kabul, Afghanistan, 21 November 2020. Photo: EPA-EFE.

At least eight people were killed and 31 injured Saturday when about two-dozen mortar rounds were fired into the center of Afghanistan’s capital Kabul, reported EFE-EPA.

At least 23 rounds of mortars were fired from the rear of two vehicles located in the north of the city, Afghan Interior Ministry spokesman Tariq Arian confirmeed when updating the number of casualties.

He warned that casualties could increase.

"Unfortunately, these rockets landed in residential areas of the city," the ministry earlier said.

The attack occurred at approximately 8.45 am local time (04:15 GMT), which is rush hour in the Afghan capital.

Most of the rockets landed in areas of the city center, which is also home to most of the government buildings.

So far no insurgent group has claimed responsibility for the attack.

While Arian blamed the Taliban, the group’s spokesman Zabihullah Mujahid earlier denied responsibility, writing on Twitter that "we do not allow the firing of rockets blindly in populated areas."

Attacks of this type have been claimed in the past by the Islamic State (IS) terror group, but the government has often linked these bombings to the Taliban.

The attack comes at the same time as peace talks between the Taliban and the Kabul government in Doha, which have been taking place since September.

"I strongly condemn today’s cowardly rocket attacks on civilian parts of the Kabul city," chairman of the High Council for National Reconciliation, Abdullah Abdullah wrote on Twitter. "Terrorizing and targeting the civilians must stop."

The need for progress in the negotiations to reduce violence coincides with the announcement of the withdrawal of US troops from Afghanistan, leaving 2,500 military personnel out of the current 4,500 by Jan. 15.

US Secretary of State Mike Pompeo is due to meet separately with negotiators from the Taliban and the government of Afghanistan in Doha on Saturday, in what could be one of the last meetings of the Donald Trump administration for the peace process in Afghanistan.