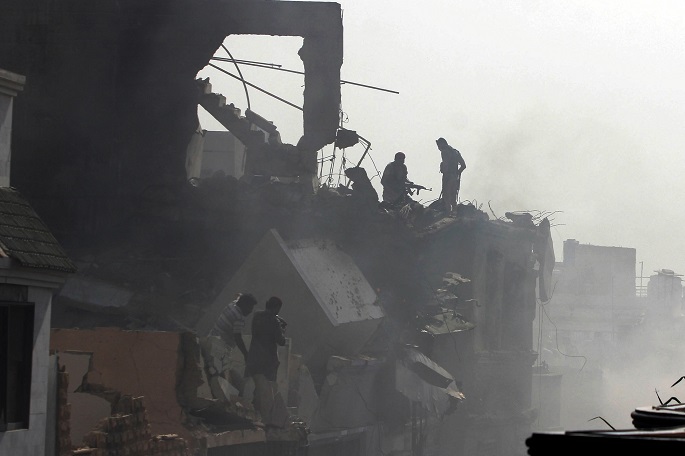 Rescuers work at the plane crash site in Karachi, Pakistan, May 22, 2020. Photo Str/Xinhua.

A total of 50 bodies and seven injured people have been recovered and shifted to two hospitals in Karachi after a passenger plane crashed in a residential area in Pakistan's southern port city of Karachi on Friday, police sources and rescuers said.

Police sources told Xinhua that the deceased would be identified through DNA tests.

Minister of Health of the southern Sindh province Azra Fazal Pechuho told local media that at least three people survived the fatal accident, including chief of the Bank of Punjab.

She also told Xinhua that she has declared an emergency in all major hospitals of Karachi and canceled leaves of all medics to join their duties.

According to Director Management of Operations PIA Jawad Haider, the plane was not fully loaded due to COVID-19 safety measures.

Briefing Xinhua about the cause of crash, Ismail Khoso, spokesman of the country's Civil Aviation Authority said that the plane of Pakistan International Airlines (PIA), Airbus A320, with some 100 people on board, crashed shortly before landing at Karachi airport on Friday afternoon.

"I cannot confirm the cause of crash, CAA's investigation board will probe the incident and its report will be released on Saturday or a day after, after which I will be able to share the details," he said.

However, he confirmed that the pilot contacted the control tower intimating that the plane was meeting some technical fault, and he was told that two runways were vacant for landing and he may use any as per convenience. "Instead of landing, the pilot preferred to take another round in the air, and shortly after he lost contact with the control, and the plane was later found crashed in residential area."

He said that loss of lives was also feared on the ground, because houses were destroyed and several walls were damaged in the crash.

The black box of the plane has been found, and it will be sent abroad for decoding, after which the situation will be cleared, the spokesman said.

According to Chinese Embassy in Islamabad, there were no Chinese nationals on board the ill-fated plane.

The PIA flight PK-8303 took off from the Allama Iqbal International Airport in the eastern city of Lahore at 1:08 p.m. local time and crashed at 2:45 p.m. local time, a PIA spokesperson Abdullah Hafeez said.

The plane crashed in Model Town colony, lying close to one of the airport's wall. Talking to Xinhua about the plane crash, an eyewitness Zeeshan Mangi said that planes flying low over their homes is a normal routine as the airport's landing area is hardly 3 km from their houses.

"Friday was also a normal day when the plane flew over our houses to land at airport, but some people saw it flying back and soaring above the ground, before coming for another round to land, but shortly before landing we saw it having problem in the air. It was tilted back and strange sounds were coming out of it," said Mangi.

"With in a blink of eye the plane fell down, it was not like that it plummeted to the ground at a 90 degree angle, its flight was smooth, yet all of a sudden it just fell down on the roofs of the street next to my home with a big bang."

He said that the streets in his colony are congested due to which snorkels of fire brigade could not reach the area, while other small fire engines and rescue teams took about 20 minutes to half an hour to reach the sight, but the damage had been done till then.

"Right now, the affected street has been cordoned off, and some bodies were shifted to ambulances through the roofs, rescue work continues and helicopters are hovering over my area to monitor the situation," the witness said.

The prime minister through Twitter expressed condolences to families of the deceased, saying that an immediate inquiry would be instituted to know the cause of the crash.

Earlier, on Dec. 7, 2016, an ATR-42 aircraft of the PIA crashed en route from northern Chitral district to capital Islamabad, claiming lives of all 48 passengers and crew members onboard.