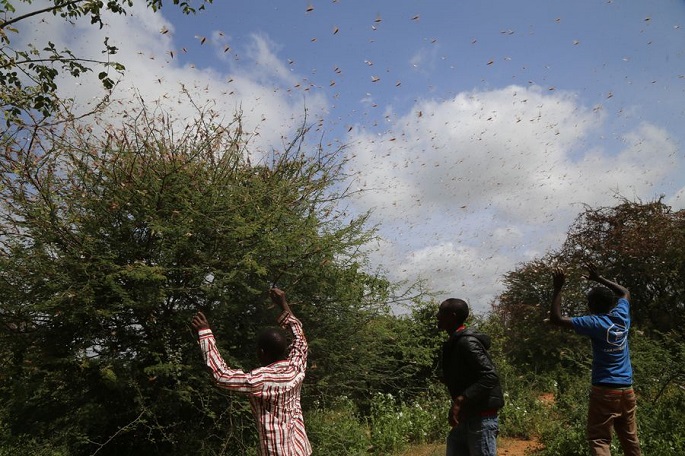 Farmers attempt to scare away locusts from their farms in Mwingi North, Kenya, Jan. 29, 2020.  (Xinhua/Fred Mutune)

The United Nations Food and Agriculture Organization (FAO) warned that the desert locust breeding has continued in the Horn of Africa (HoA), causing locusts to increase further in Ethiopia, Somalia and Kenya with new swarms forming in the coming two months.

"Breeding continues in the Horn of Africa, which will cause locusts to increase further in Ethiopia, Somalia and Kenya with new swarms forming in March and April. Consequently, there is an unprecedented threat to food security and livelihoods in the region," the FAO said in its desert locust outbreak update issued late Wednesday.

In Ethiopia, maturing swarms were present in eastern and southern areas and additional swarms moved into the Rift Valley from the south and the north. Egg-laying and hatching are likely to be underway but so far it has not been detected. Aerial and ground control operations continue in most areas, the FAO said.

Noting that the "widespread hatching and band formation of desert locust will occur in the coming weeks in Kenya, Ethiopia and Somalia," the FAO also stressed that there remains a risk of a few small swarms appearing in northeast Uganda, southeast South Sudan and perhaps northern Tanzania in the coming days.

According to the FAO, above-normal desert locust breeding also continued along both sides of the Red Sea coast where hopper groups, bands, adult groups and a few swarms are forming on the coastal plains, in which desert locust swarms have continued to appear in the highlands and interior of Yemen amid ongoing progress in control operations in Sudan, Eritrea, Saudi Arabia.

The FAO also stressed that numerous immature and mature swarms have continued to move throughout northern and central areas of Kenya as mature swarms reached within 50-km of the Uganda border on Feb. 6 and other mature swarms nearly reached the Tanzania border on the Feb. 7.

On Saturday, the UN Secretary-General Antonio Guterres had also called for intensified international efforts to deal with a locust outbreak that has affected large parts of the African continent.

"The UN has issued an urgent appeal for assistance. I ask the international community to respond with speed and generosity to ensure an effective response and control the infestation while we still have the chance," Guterres said on the sidelines of the 33rd African Union (AU) Summit at the headquarters of the AU in the Ethiopian capital, Addis Ababa.

The UN chief stressed that the locust swarms affecting many parts of Africa are unprecedented in size and scope, with climate change playing a big part in aggravating the locust crisis.

"Today locust swarms are as big as major cities and it's getting worse by the day. There is also a link between climate change and the unprecedented locust crisis plaguing Ethiopia and East Africa," Guterres said, "warmer seas mean more cyclones generating the perfect breeding ground for locusts."

As part of the concerted efforts to control the spread of desert locust infestation in the region, the 55-member pan-African, AU, had also last week disclosed that it is working with the FAO to mitigate the effect of desert locust that has significantly affected the East African sub-region, particularly countries including Ethiopia, Kenya, and Somalia.

"We have our own regional center for phytosanitary counsel, and we are also working directly with FAO," said Josefa Sacko, AU Commissioner for Rural Economy and Agriculture, told a press conference on Friday, as she emphasized that the AU is working with FAO to address the problem and also contain its spread to other countries in the region and beyond.

"We really want to make sure that there is no spread in another country like Tanzania, even the other region apart from the East African region, like Uganda. We are really addressing this issue very seriously and on timely because when we had a Fall Army worm, we do not address it immediately," the AU Commissioner added.

The desert locust (Schistocerca gregaria), which is considered as the most dangerous of the nearly one dozen species of locusts, is a major food security peril in desert areas across 20 countries, stretching from west Africa all the way to India, covering nearly 16 million square kilometers, according to the UN.