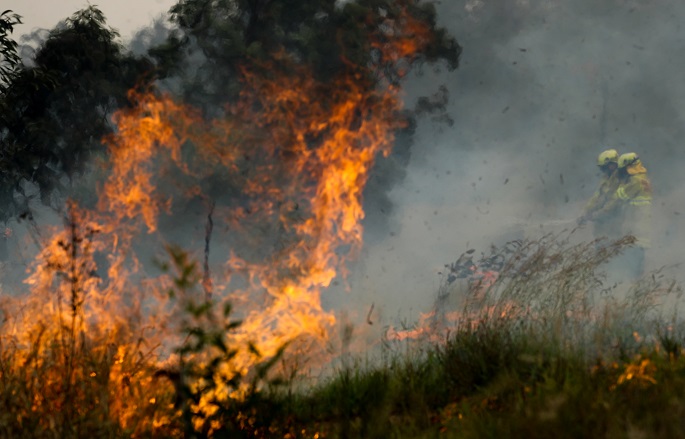 Three large wildfires burning on the northwest edge of Australia's Greater Sydney have now merged into one monster inferno that local media have dubbed the "mega-blaze."

The enormous super-fire has now burnt through around 300,000 hectares of bushland as it encroaches upon homes and property in the area.

Just one of around 90 fires that are still burning across New South Wales (NSW), Premier of the State Gladys Berejiklian held a media conference on Friday to prepare the public for even worse conditions in the coming days.

"As we lead into the Summer months, previously (fires) were pretty much contained to the northern part of NSW but what we have seen this week is our resources stretched across the entire coastline," she said.

"We have also seen the fires come into close proximity of major population centers, whether it is on the south coast, north coast or Greater Wester Sydney."

"We are anticipating conditions to worsen next week."

Bracing for volatile warm weather, the NSW Rural Fire Service Commissioner Shane Fitzsimmons said, "we are talking about mid to high 30's (degrees Celsius) ... very low humidity, so the air is particularly dry so we are going to see the winds ... really spread these fires."

"Yesterday we saw up over 3,000 people deployed across fire grounds trying to bring these things under control and trying to save as much and as many people as they can," he added.

Since the beginning of the bushfire season Down Under, six people have lost their lives, and around 680 homes and 2,000 structures have been destroyed, along with 2 million hectares of bushland.

Despite the horrific losses, Fitzsimmons said close to 5,000 homes and properties have been saved by firefighters.

"Unfortunately we are now in Summer, we know that we can expect hotter conditions as the weeks and months roll ahead."

"Between now and February we can expect below average rainfalls and above average temperatures which signals increased fire dangers, particularly across a terribly drought-stricken landscape."

"The dryness in the fields makes them extremely flammable and we know we still have months ahead," he said.

With another 50 fires also burning in the state of Queensland, Australia's east coast has been blanketed with thick smoke.

As a result, dozens of schools have been forced to close or keep children indoors during lunch breaks.

Across the state's hospitals, over 1,100 people have been admitted experiencing asthma and other breathing-related problems triggered by the poor air quality.

There have even been calls for beaches to be closed and public sporting events to be cancelled, but at the moment no such decisions have been made.

"An easterly wind change forecast for the afternoon is expected to provide an Air Quality Index reading at a satisfactory level for the matches to be played, taking into account the welfare of the players and match officials."

"(But) should the welfare of the players and match officials appear to be compromised, appropriate action may be taken which may include delaying matches or rescheduling matches."

Half a billion affected by insufficient paid work: ILO

Hundreds of "terror attacks" foiled in Israeli in 2019