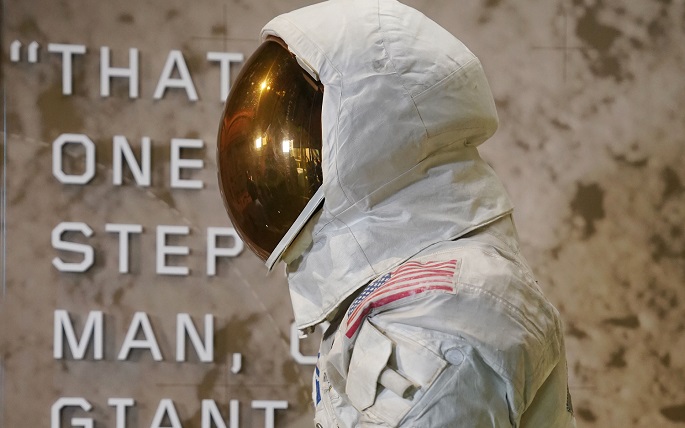 U.S. astronaut Neil Armstrong's Apollo 11 spacesuit is seen at the Smithsonian National Air and Space Museum in Washington D.C., the United States, July 16, 2019. The spacesuit is back on display after extensive conservation in celebration of the 50th anniversary of the Apollo 11 Moon landing. Photo Xinhua by Liu Jie.

The U.S. space agency NASA on Saturday celebrated the moment astronauts landed on the moon for the first time 50 years ago, replaying online the original moon landing broadcast from July 20, 1969.

It was among the multiple festivities held this week to mark the anniversary, including projecting the life-sized animation of Saturn V rocket on the Washington Monument, in the company of a 17-minute video and light show on Friday and Saturday nights.

On July 16, 1969, astronauts Neil Armstrong, Buzz Aldrin and Michael Collins lifted off on a Saturn V rocket on a journey to the moon. Four days later, Armstrong and Aldrin landed Apollo 11's lunar module on the moon, becoming the first humans to set foot on the lunar surface.

In Armstrong's hometown of Wapakoneta, Ohio, nearly 2,000 runners competed in 5-km and 10-km "Run to the Moon" races on Saturday.

Starting at 10:38 p.m. Eastern Time, NASA will also air the historic footage of the moonwalk in real time as it happened 50 years ago.

Also on Saturday, Aldrin accompanied U.S. Vice President Mike Pence to the Kennedy Space Center and showed him the pad where he began that momentous journey.

"Today our nation pays tribute to three brave astronauts who sat atop a 360-foot rocket that lifted off from Pad 39A 50 years ago this week," said Pence. "Apollo 11 is the only event in the 20th century that stands a chance of being widely remembered in the 30th century."

At the anniversary day, the United States unveiled its plan of deep space exploration in order to bring the Apollo 11 legacy forward.

Pence said in the speech that NASA will launch, in its Artemis 1 project, the unmanned Orion spacecraft and Space Launch System rocket around the moon to test the system and pave the way for landing the first woman and the next man on the moon in five years.

Lockheed Martin, NASA's prime contractor for Orion, has finished building the spacecraft that will fly on Artemis 1, according to NASA.

However, NASA administrator Jim Bridenstine told the U.S. senators in a hearing on Wednesday that the Space Launch System would not be ready until 2021 after multiple delays, adding more uncertainty to NASA's moon-returning schedule.

In March, Pence called returning Americans to the moon a "spark of urgency," and called for efforts to maintain the country's space superiority.

But in an interview with Fox News on Friday night, Aldrin, the second man to walk on the moon after Armstrong, urged global cooperation to achieve humanity's presence on the moon and Mars.

"It would not be at all helpful to be competing for the moon or Mars, that's very wasteful," Aldrin told the media.