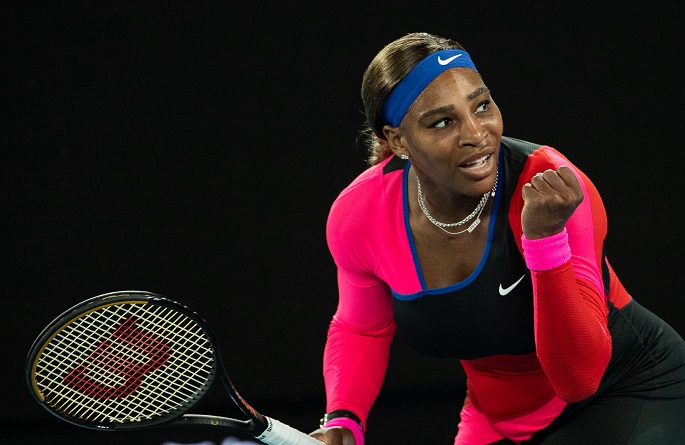 Serena Williams celebrates during the women's singles quarterfinal match between Serena Williams of the United States and Simona Halep of Romania at the Australian Open in Melbourne Park, Melbourne, Australia, Feb. 16, 2021. Photo Xinhua by Hu Jingchen.

Tennis legend Serena Williams showed yet again she can still perform at the very top of the sport, beating world No. 2 Simona Halep, 6-3, 6-3, at the Australian Open quarterfinals here on Tuesday, reported Xinhua.

The 39-year-old will continue her hunt for a record 24th Grand Slam title when she meets Naomi Osaka in the semifinals later this week.

"I definitely think this is the best match I've played this tournament -- and obviously I had to, going up against No. 2 in the world," Williams said.

The American made her intentions known from the very start of Tuesday's match, rocketing an unbeatable return on the first point, with Williams explaining afterward, "I just saw it, it looked like a donut, and I went for it."

From there, the power shots came thick and fast from both players. The two champions looked difficult to separate, with both capable of making, and returning challenging plays.

While Williams was clearly not afraid to tackle the riskier shots, Halep's consistency in rallies led the American to ratchet up a far higher number of unforced errors.

In the end, Williams' aggressive style of play paid off. Despite making 33 unforced errors throughout the match, she balanced them out by hitting 24 winners. In comparison, Halep made 19 unforced errors and hit nine winners.

"I just realized that I was making a lot of unforced errors on those games that I lost and I knew that I had an opportunity to play better," Williams said.

After winning the first set, Williams pushed early to maintain control in the second but could not snatch a break from Halep. The aggressive approach cost Williams the first break, giving Halep a 2-0 lead in the second game.

However, true to her reputation Williams struck back with the players going break for break across four consecutive games. The American was the first to stop the trend, leveling the score at 3-3.

From there Williams claimed an important break in the fifth game, setting her up to hold serve and then break again to win the match.

"It was a tough match," Halep said. "She played really well, and definitely she deserved to win tonight."

"She's moving better and she hits strong balls. I feel like she's in a good shape now. She has a really good game. Always did."