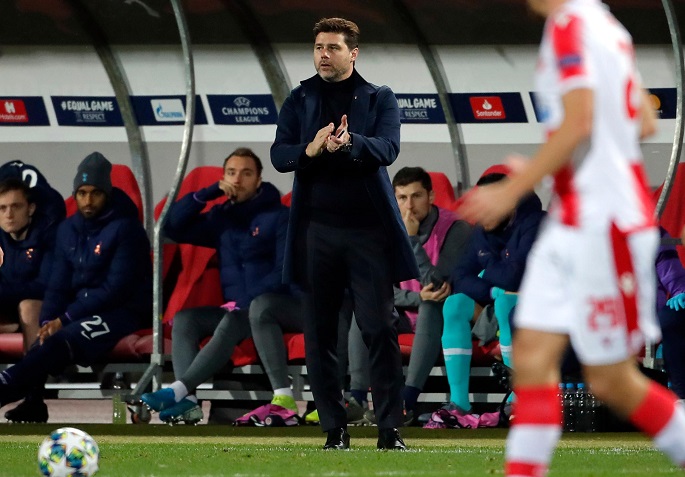 Mauricio Pochettino wills his players on during the UEFA Champions League group B match between Crvena Zvezda and Tottenham Hotspurs in Belgrade, Serbia on Nov. 6, 2019. (Xinhua/Predrag Milosavljevic)

Former Tottenham manager Mauricio Pochettino has been hired as the head coach of Paris Saint-Germain, the French league giant announced on Saturday.

The Argentine, 48, who replaced Thomas Tuchel of Germany, penned a contract until June 2020, with the option of an extra year.

"We are very pleased to welcome Mauricio Pochettino as the first-team coach," said Nasser Al-Khelaifi, the chairman of PSG. "The return of Mauricio fits perfectly with our ambitions and it will be another exciting chapter for the club and one I am positive the fans will enjoy."

Pochettino played for PSG as a central defender between 2001 and 2003, scoring six goals in his 95 appearances.

"I am really happy and honored to become the new coach of Paris Saint-Germain," said Pochettino after signing his contract. "This club has always held a special place in my heart. I have wonderful memories, especially of the unique atmosphere of the Parc des Princes."

"I return to the club today with a lot of ambition and humility, and am eager to work with some of the world's most talented players."

After his retirement, Pochettino started his coaching career at Spanish club Espanyol in 2009, before moving to England to take the reins of Southampton between 2013 to 2014, and Tottenham from 2014 to 2019.

He established himself as one of the world's elite coaches at the north London side where he led the team to its first Champions League final in 2019, only to lose to fellow Premier League team Liverpool in the showdown.

He was sacked five months later as the club only ranked 14th in the Premier League three months into the new season, and replaced by Jose Mourinho.

Similarly, Tuchel was dismissed by PSG only four months after he guided the capital-based club to its first Champions League final, where it was defeated by German champion Bayern Munich 1-0.

Tuchel's final match in charge of PSG was a 4-0 win over Strasbourg on Dec. 23 before the winter break, leaving the Ligue 1 defending champion in third place on the table, one point off leader Lyon and second-placed Lille.

Pochettino will make his coaching debut for PSG on Jan. 6 when the side travel to Saint-Etienne in the league.