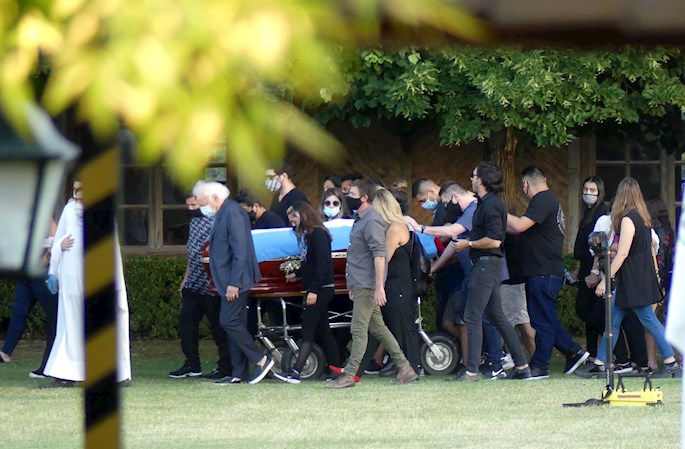 Family and friends of Diego Armando Maradona accompany his coffin at a cemetery in Buenos Aires on Thursday, 26 November 2020. Photo: EFE-EPA.

Argentine soccer icon Diego Armando Maradona was interred Thursday alongside his parents at a cemetery on the outskirts of Buenos Aires, reported EFE.

Only around 30 people were permitted inside the gates of Jardin Bella Vista, where the elder Diego Maradona was buried just five years ago, for the hour-long ceremony at the grave site.

Thousands of people lined the 40km (25mi) route to the cemetery from the Casa Rosada, the seat of Argentina's government, where Maradona's coffin lay in state for nearly 12 hours on the first of three official days of mourning.

He is only the second athlete to be so honored, joining five-time Formula 1 champion Juan Manuel Fangio (1911-1995).

The man who shared the FIFA Player of the 20th Century award with Brazilian great Pele died Wednesday of a heart attack at the age of 60 and his remains were brought to the Casa Rosada shortly after midnight for a wake initially limited to family and friends.

The giant Plaza de Mayo square was already packed with people when the doors were opened at 6.00 am and the crowd swelled to hundreds of thousands as the day wore on, despite the Covid-19 pandemic.

For most of the day, an orderly procession of mourners filed past Maradona's coffin, draped in the Argentine flag and his iconic No. 10 national team shirt.

When police began to close the access points as the wake approached its scheduled end, some of those in line rebelled and clashed with the cops.

Maradona's family, hoping to avert more serious disturbances, extended the wake for three additional hours, but a large contingent of mourners scaled the temporary security fences and streamed into the Casa Rosada, prompting authorities to move the coffin to another part of the building.

During the public portion of the wake, President Alberto Fernandez embraced Maradona's ex-wife, Claudia Villafañe, and the couple's adult daughters, Dalma and Gianinna.

The president, a devoted supporter of the club where Maradona began his professional career at 15, Argentinos Juniors, placed a team shirt on the coffin, while Vice President Cristina Fernandez (no relation) deposited a rosary.

Maradona counted Cristina - a former president - among his friends and was at her side during the funeral of her husband and presidential predecessor, Nestor Kirchner, in October 2010.

The diminutive Maradona led Argentina to the World Cup title in 1986 and was considered the best player on the planet during much of the 1980s, when he starred for FC Barcelona and Italian side Napoli.

Most of the people who thronged the Plaza de Mayo on Thursday wore the shirts of the national team or Boca Juniors, where Maradona ended his career in 1997.

"Thanks for all he gave us, for bringing Argentina to the top of the world. The whole world knows us thanks to Diego," a man named Gustavo told Efe.

Gustavo was accompanied by his son, a fervent Maradona fan even though he's far too young to have seen No. 10 in action.

Claudio Rodriguez, who played with Maradona on the Argentinos Juniors youth squad in the 1970s, told Efe that he and his teammates had "the good fortune of seeing the best Maradona of all."

Maradona, according to Pablo Echarri, an actor who has worked with Dalma Maradona, was an "incomparable athlete" who rubbed elbows with the rich and powerful but never forgot what it was like to grow up poor in a Buenos Aires shantytown.

After eight years living abroad in the wake of his abrupt dismissal as coach of the national team, Maradona returned to Argentina last year to become manager of first-division club, a position he held until his death at a house in a gated community north of Buenos Aires city.

Maradona underwent treatment for drug addiction for many years, including a stint in Cuba. While on the Caribbean island, he struck up a friendship with Cuban revolutionary leader Fidel Castro, who died at the age of 90 on Nov. 25, 2016.