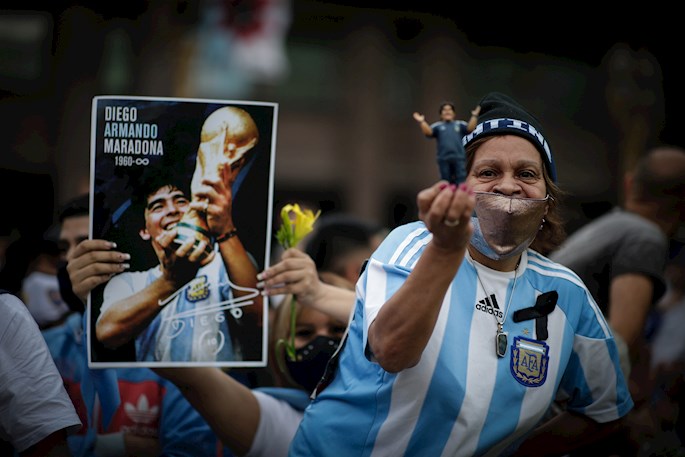 Maradona fans gathered at the Casa Rsosada in Buenos Aires to bid farewell to the legendary soccer player, who died from a heart attack on Wednesday. Photo: EFE.

Diego Maradona’s body is lying in repose at the government headquarters in Buenos Aires, where thousands of people are bidding farewell to the legendary soccer player, who died from a heart attack on Wednesday, reported EFE.

The highways into the Argentine capital were jammed with traffic as thousands of people headed to join the crowds of mourning fans outside the Casa Rosada. Maradona’s coffin, draped in the Argentine flag and his iconic number 10 shirt, was on display inside the building on Thursday.

A constant flow of mourners paid tribute to the soccer star, widely considered one of the best players to grace the sport.

Family members, close friends and relatives held a small private ceremony for Maradona before his coffin was transferred to the Casa Rosada with a police escort.

Emotions ran high when the first mourners were granted entrance to the building and there were brief clashes between fans and police officers, prompting a delay to the proceedings.

Maradona is a national hero in Argentina and the country has declared three days of official mourning.

As a player, he gained star status at Napoli and Barcelona between 1982 and 1991. He remains a giant figure in the Italian city, where his face adorns murals on the side of several housing blocks.

But he will be best remembered for his exploits as a player and particularly his performance at the 1986 World Cup in Mexico, where he led Argentina to the title and won the Golden Ball as the tournament's best player.

He will also be remembered for his troubled side; his struggles with alcohol and drugs, and his series of health setbacks.

Maradona, who at the time of his death was the head coach of Argentine first-division club Gimnasia, died on Wednesday at a house in a gated community north of Buenos Aires city.

He had taken up residence there on 11 November after having been hospitalized for anemia, dehydration and depression and then undergoing successful surgery for a subdural hematoma (bleeding between the skull and brain).