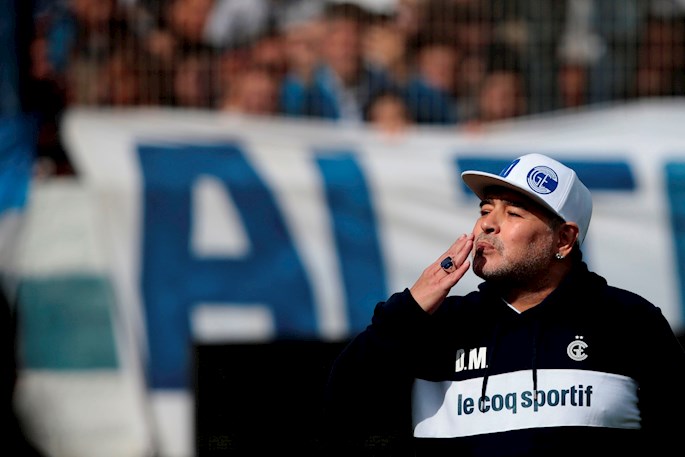 Tributes flooded in from around the soccer world and beyond following the death on Wednesday of Argentine soccer legend Diego Maradona, regarded by many as the greatest player of all time.

Argentine head of state Alberto Fernandez declared three days of mourning in memory of the 60-year-old hero of the 1986 World Cup and announced that his wake will take place at the presidential palace, while three fellow soccer immortals - Brazil's Pele, fellow Argentine and FC Barcelona superstar Lionel Messi and Portuguese national team and Juventus great Cristiano Ronaldo - commented on his towering legacy.

The 80-year-old Pele, who was co-recipient of the FIFA Player of the 20th Century award along with Maradona, lamented the death of one of the few players who could be called his equal.

"Sad news to lose a friend like that. May God give enough strength to his family. For sure, one day we will kick a ball together in heaven," the Brazilian icon said.

The 33-year-old Messi, who has been a worthy successor to Maradona in terms of magic on the pitch in a diminutive package but thus far has been unable to match his countryman's World Cup success, also expressed his condolences.

"A very sad day for all Argentines and for soccer. He's taking his leave but he's not going away, because Diego is eternal," Messi, who was coached by Maradona at the 2010 World Cup, wrote on Instagram. "I'm left with all the moments he and I shared, and I wanted to take this opportunity to extend my condolences to all of his family and friends. RIP."

The 35-year-old Ronaldo also paid heartfelt tribute to the Argentine.

"Today I bid farewell to a friend and the world bids farewell to an eternal genius. One of the best ever. An incomparable magician. He leaves too soon but leaves a boundless legacy and a void that will never be filled," the Juventus superstar wrote on Instagram.

The 1.65-meter (5-foot-5) Maradona led Argentina to the World Cup title in 1986 and was considered the best player on the planet during much of the 1980s, when he starred for FC Barcelona and Italian side Napoli.

His wizardry on the pitch was perhaps best expressed in a goal he scored in the quarterfinals of the 1986 World Cup in Mexico against England, when he dribbled the ball 60 meters (195 feet) and eluded five English players before guiding a shot past net minder Peter Shilton.

The match, which Argentina won 2-1, also is remembered for a notorious Maradona hand-goal that was not disallowed by the referee.

The Argentine attacking midfielder later said memorably that the goal had been scored by "the hand of God," angering English fans at a time when the enmity of the three-month 1982 war between Argentina and the United Kingdom over the Falkland Islands had not yet been overcome.

But Maradona's reach in popular culture went far beyond sports, and that was evident in the reactions to his death by figures from the worlds of entertainment and politics, including Argentina's head of state.

"You lifted us to the greatest of heights. You brought us tremendous joy. You were the greatest of them all. Thank you for having been here with us, Diego. We'll miss you all our lives," said Fernandez, a big fan of Maradona's first professional club, Argentinos Juniors.

Like the Argentine president, the Italian city of Naples, where Maradona enjoyed his greatest success in club soccer, also declared a period of official mourning for the man known in his prime as "El Pibe de Oro" (Golden Boy).

The mayor recalled the night of July 5, 2017, when some 10,000 people gathered in Plebiscito Square to hail Maradona as an honorary citizen of Naples in conjunction with the 30th anniversary of Napoli's winning its first-ever Italian league championship in the Argentine's third season with the squad.

Following the historic 1987 triumph, Napoli went on to win another league crown, a Coppa d'Italia, a UEFA Cup and an Italian Supercup with Maradona.

Maradona, who at the time of his death was the head coach of Argentine first-division club Gimnasia, died on Wednesday at a house in a gated community north of Buenos Aires city.

Maradona underwent treatment for drug addiction for many years, including a stint in Cuba. While on the Caribbean island, he struck up a friendship with Cuban revolutionary leader Fidel Castro, who died at the age of 90 exactly four years ago.

Maradona's press agent, Sebastian Sanchi, confirmed to Efe that the soccer legend had passed away.

Local media attributed his death to a heart attack and said Maradona had received emergency medical assistance at his home, although his family and friends have not yet confirmed the circumstances surrounding his death.

An autopsy was scheduled to take place later Wednesday.

Fernandez, meanwhile, said Maradona's wake will be held starting Thursday at Buenos Aires' Casa Rosada, when he will become only the second athlete to receive that honor after five-time Formula 1 champion Juan Manuel Fangio.