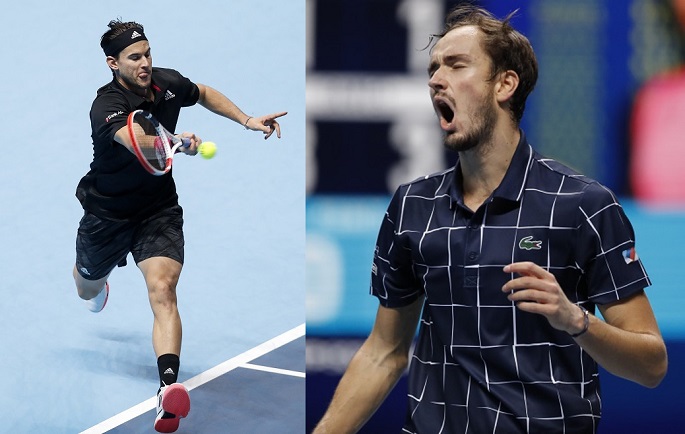 Russian fourth seed Daniil Medvedev came from one set down to oust world number two Rafael Nadal 3-6, 7-6(7-4), 6-3, reaching the final at the ATP Finals for the first time here on Saturday, reported Xinhua.

20-time grand slam champion Nadal looked to be cruising after the first set, but was quickly down 3-0 in the second set.

The 34-year-old Spaniard showed great determination to come from behind to lead 5-4, but the in-form Russian refused to give up with powerful serves and strong forehands.

In the deciding set, Nadal couldn't find a way to hold his soaring opponent, ending his season still await for a trophy of the season finale.

In the other semifinal, Djokovic saved four match points in the second set and dragged the match into the decider.

The victory seemed so close for the Serb while he led 4-0 in the tiebreak of the last set, but Thiem grabbed six points in a row to turn the table.

"What he did from 0-4 in the third-set tiebreaker was just unreal," said five-time Finals champion Djokovic. "I mean I don't think I played bad. He just crushed the ball. "

Thiem admitted he was kind of lucky at the end of the marathon duel. "From 0-4 in the third-set tiebreak I went for every single shot. It was amazing, and it's not gonna be like that in every match."