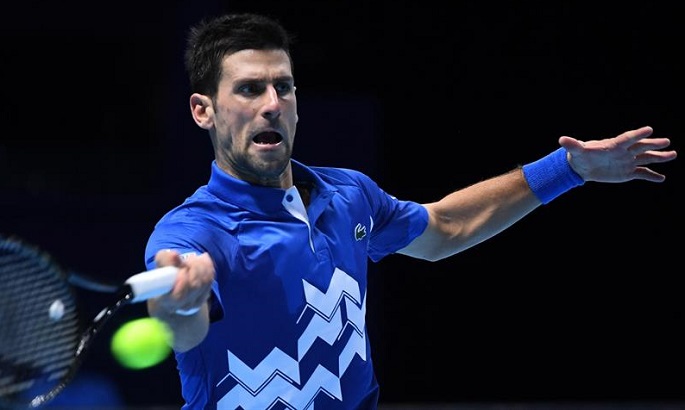 Serbian world No. 1 Novak Djokovic hits a forehand during his round-robin match on 20 November 2020 at the ATP Finals in London, United Kingdom, against German world No. 7 Alexander Zverev. Photo: EPA-EFE/ANDY RAIN.

Serbian world No. 1 Novak Djokovic secured a berth in the last four of the ATP Finals with a 6-3, 7-6 (7-4) victory here Friday afternoon over Germany's Alexander Zverev, reported EFE-EPA.

The five-time champion, who is now two victories away from equaling the record title haul of Swiss great Roger Federer at this year-end event, will next take on Austrian world No. 3 Dominic Thiem in Saturday's semifinals.

Djokovic earned a service break in the second game of his last Group Tokyo 1970 match at the O2 Arena, in part by executing one of his signature shots - an open-stance backhand passing shot in which he ranged to his left and fired a winner crosscourt past Zverev.

The 17-time Grand Slam champion then maintained that advantage the rest of the set, although he had to save two break points in the seventh game.

Zverev refused to go away and leveraged his strong first serve to rack up six consecutive service holds in the second set and force a tiebreaker.

For the match, the German put 75 percent of his first serves in play and won 84 percent of those points. Not allowing Djokovic to have looks at his second offering was important, considering his winning percentage on second-serve points was just 36 percent.

Zverev put himself in position to force a decider by jumping out to an early 2-0 lead in the tiebreaker. But Djokovic used his remarkable defense to win the third point and avoid a second mini-break.

That was part of a decisive match-ending run by Djokovic, who went up a mini-break at 5-3 with an outstanding backhand passing shot winner and then wrapped up the victory in one hour and 36 minutes when he forced an error with a down-the-line forehand.

"It was really anybody's game, I think, for most of the match. In the tiebreak I just read his approach (at 4-3), served well when I needed to close out the match," the world No. 1 was quoted as saying afterward by the ATP Tour's website.

With the win, Djokovic has advanced to the last four of the ATP Finals for the ninth time in his career and will next square off against Thiem in a rematch of last year's thrilling robin-robin match here that the Austrian narrowly won.

"I played him last year here and lost 7-6 in the third set. It was really a thrilling match. Hopefully we can have another great match, but hopefully this time with another outcome," the Serbian said.

One last ATP Finals round-robin match will be played on Friday night pitting Argentine world No. 9 Diego Schwartzman against Russian world No. 4 Daniil Medvedev, who has already booked a match-up against Spanish world No. 2 Rafael Nadal in Saturday's semifinals.