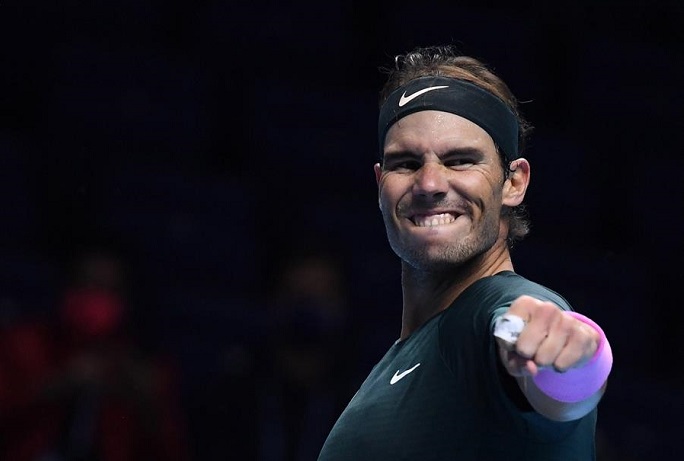 Spanish great Rafael Nadal defeated Stefanos Tsitsipas 6-4, 4-6, 6-2 here Thursday night to book a place in the last four of the ATP Finals for the first time since 2015, reported EFE-EPA.

Little separated the world No. 2 and his sixth-ranked Greek rival - the defending champion at this elite, eight-man, year-end event - for most of the final Group London 2020 contest at the O2 Arena in London.

Tsitsipas looked to impose his attacking style on the 20-time Grand Slam champion and managed to stay on serve through the first eight games, although he had to save two break points when serving at 3-3.

But costly errors - two backhand mistakes and a double fault - crept into the Greek star's game when he was serving at 4-4, causing him to squander a 30-15 lead and drop serve for the first time.

Nadal then proceeded to serve out the set in the following game thanks in part to a timely ace with the score knotted at 30-30.

Tsitsipas faced a steep uphill battle at that stage of the match, particularly considering that the Spaniard had won 70 consecutive matches dating back to last year when winning the first set.

But he staved off a break point en route to taking the opening game and then reeled off four relatively easy service holds to make the score 5-4.

Nadal also had been rolling along on serve, but he got down 15-40 in the 10th game and then relinquished the set with a double fault in the net.

The Spaniard appeared to right the ship when he broke serve in the opening game of the decider, but he then gave the break right back in the following game.

But it was all Nadal from that point on, with the Spaniard breaking Tsitsipas' serve once again in the third game with some remarkable tennis, winning one point with a backhand overhead winner on the sideline and another after a tremendous defensive lob that landed on the baseline.

Nadal, who ranks first on the ATP Tour in percentage of return games won, broke Tsitsipas one final time in the seventh game and then clinched the victory in the following game with an outstanding backhand down-the-line winner.

"(To) be in the semi-finals here, in the last tournament of the year, is an important thing," the 34-year-old Nadal, who is still seeking his maiden title at this indoor hard-court event, was quoted as saying by the ATP Tour's website. "(I am) happy for that and I am looking forward to (Saturday's) semi-finals against Daniil (Medvedev)."

The Spaniard holds a 3-0 edge in their head-to-head, but the last two matches between him and the Russian world No. 4 have been memorable ones. Nadal narrowly topped Medvedev in five sets to win the 2019 US Open and then edged the Russian in a third-set tiebreaker in the round-robin stage of last year's ATP Finals.

But he had already booked a semifinal berth with victories over Tsitsipas and Nadal and now awaits the winner of Friday's match in Group Tokyo 1970 between Serbian world No. 1 and five-time champion Novak Djokovic and German world No. 7 and 2018 champ Alexander Zverev.