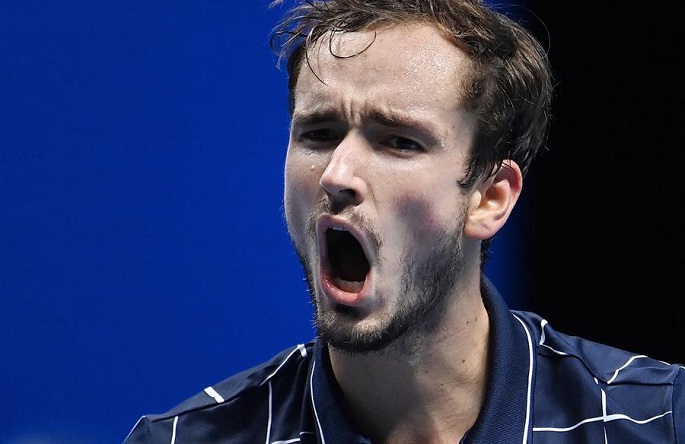 Russian world No. 4 Daniil Medvedev cruised to a surprisingly comfortable 6-3, 6-3 victory over Serbian world No. 1 Novak Djokovic on 18 November 2020 at the ATP Finals in London. Photo: EPA-EFE.

Serbian world No. 1 Novak Djokovic finds himself one loss away from elimination at the ATP Finals after a lackluster 6-3, 6-3 defeat here Wednesday night at the hands of fourth-ranked Russian Daniil Medvedev, reported EFE-EPA.

Two days after a convincing straight-set victory Monday over diminutive Argentine Diego Schwartzman at the O2 Arena, the 17-time Grand Slam champion appeared uninterested at times against an opponent who chased down shots from corner to corner and made remarkably few unforced errors.

Low on energy and short on ideas for penetrating the rangy Russian's defense, Djokovic repeatedly - and unsuccessfully - sought to cut the rallies short with drop shots.

Although he saved the first four break points he faced, the Serbian was unable to escape trouble a fifth time and dropped serve in the seventh game of the match.

That was part of a decisive run of seven straight games for Medvedev, who turned an early 3-2 deficit into a 6-3, 3-0 lead.

Djokovic appeared poised to mount a comeback when he earned a break point with the Russian serving at 2-0 in the second set, but Medvedev escaped trouble and finished off that game with back-to-back aces.

The world No. 4 then proceeded to wrap up the victory with three more service holds to join Austrian world No. 3 Dominic Thiem in the semifinals.

"I like to play Novak because he is one of the greatest champions in the history of our sport," the 24-year-old Medvedev was quoted as saying on the ATP Tour's website. "To be completely honest, I am sure he didn't play his best today. But still, it happens for everybody."

"He was just better, no question about it. He's serving tremendously well, moving great. (He didn't) give me too many unforced errors and free points," he said. "Yeah, I mean, just not a great match from my side. I thought I could have and should have done better, but credit to him for playing on a high level."

Djokovic, who is seeking to equal Swiss great Roger Federer's mark of six titles at this elite, eight-man, year-end event, now will need to find a much higher level when he takes on German world No. 7 Alexander Zverev on Friday with a berth in the semifinals on the line.

Schwartzman will take on Medvedev on Friday, although the Argentine has already been eliminated from semifinal contention.

In Group London 2020, Spanish world No. 2 Rafael Nadal and Greek world No. 6 Stefanos Tsitsipas will square off for a semifinal berth when they meet in Thursday's marquee match.

Thiem will play Russian world No. 8 Andrey Rublev, whose hopes of reaching the tournament's final four ended when he narrowly lost to Tsitsipas on Tuesday.