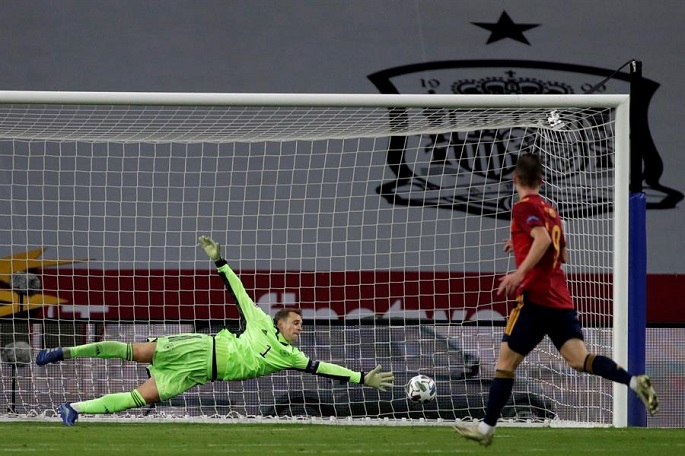 The last round of matches in League A's Groups 3 and Group 4 culminated with Spain's humiliating rout of Die Mannschaft in the southern Spanish city of Seville, Sweden's relegation to League B and uncertainty surrounding a clash between Switzerland and Ukraine that was suspended after several Ukrainian players tested positive for the coronavirus.

But clearly the result of the day occurred at La Cartuja stadium, where La Roja put together what was by far their best match since their round-of-16 elimination at the 2018 World Cup at the hands of host Russia.

With a Nations League Finals berth on the line, Spain took the field with five players (Rodri, Koke, Alvaro Morata, Jose Luis Gaya and Sergio Canales) who did not start in their previous Group A4 match on Saturday - a 1-1 draw against Switzerland in Basel.

Koke made a particularly strong contribution to the starting line-up, while 20-year-old Manchester City winger Ferran Torres netted a hat-trick.

Morata opened the scoring in the 17th minute when he headed into the back of the net off a corner kick. Torres then doubled that lead when he powered home a ball that had ricocheted the crossbar, while Rodri made the score 3-0 with Spain's second goal in the air in minute 38.

In the second half, Torres took advantage of poor German defending to score a pair of counter-attack goals in the 55th minute and 71st minutes.

Mikel Oyarzabal then scored one final goal in minute 89 as Germany stumbled to their first 6-0 loss since a defeat to Austria in a friendly in Berlin in 1931.

Afterward, Spanish head coach Luis Enrique said his team had delivered an outstanding performance on Tuesday but put it in the context of a broader run of good form.

"We feel ... there hasn't been a single match in this phase (dating back to early September) that we deserved to lose. We played great matches against Ukraine and Germany. We've scored 13 goals in six matches and given up three. With that, every one can draw their own conclusions. In this phase, despite the (two) draws, I think we deserved quite a bit more," he said.

Tuesday's other Group A4 match pitting Switzerland against Ukraine, which was to have been played in Lucerne, was canceled. But two Group A3 contests were completed.

With France having already secured a berth in the October 2021 four-team Nations League Finals, the focus was on the battle between Croatia and Sweden to avoid relegation to League B of the 2022-2023 Nations League.

Although Croatia narrowly lost 3-2 at home to Portugal, the 2018 World Cup runner-ups managed to remain in League A thanks to Sweden's 4-2 loss to France.

Viktor Claesson put the Swedes ahead 1-0 in just the fourth minute at Saint-Denis, but the reigning world champions stormed back with three unanswered goals, two of them by Olivier Giroud.

Robin Quaison pulled one back for Sweden in the 88th minute, but Kingsley Coman gave France a two-goal cushion once again with one final score deep in second-half stoppage time.

In Split, Croatia, Mateo Kovacic scored a brace for the home side, but Portugal emerged victorious thanks to three second half goals.

Ruben Dias scored two of them, including the game winner in the 90th minute.

Even so, Croatia barely beat out Sweden (both with three points) thanks to a slightly better overall goal differential (-7 versus -8) and will remain in League A for the next edition of the competition.