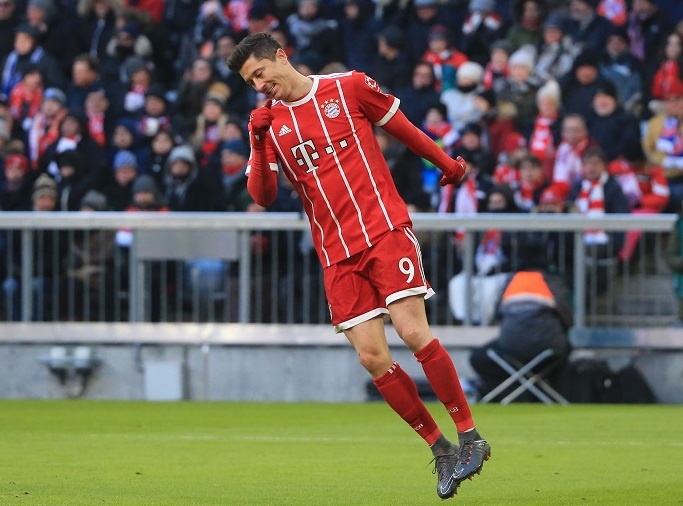 Robert Lewandowski scored a brace as Bayern Munich hammered Chelsea 4-1 at home on Saturday to progress to the Champions League last eight 7-1 on aggregate, reported Xinhua.

The German champions, who have won 18 straight games since February and haven't lost since December, will face Spanish giants Barcelona, who defeated Napoli 3-1 in Saturday's other game to advance 4-2 on aggregate.

Bayern went into the game with a 3-0 lead from the first leg at Stamford Bridge back in February. The Polish striker quickly made it 5-0 as he converted a penalty in the 10th minute and then set up Ivan Perisic's second in the 24th.

It was Lewandowski's 12th goal in the Champions League in this disrupted season, and he didn't wait too long for his 13th. The goal machine headed home in the closing period of the game to finalize it 4-1.

The 31-year-old lethal striker, who has scored 53 goals in 44 appearances in all competitions this season, now has a good chance to challenge Cristiano Ronaldo's Champions League record of 17 goals in a single season.

"We wanted to win the game and show we were picking up where we left off," Bayern coach Hansi Flick told Sky after the match.

"As with any opponent, we have the requisite respect, and we're going to prepare well," the German coach said when talking about quarterfinals rivals Barcelona.

Chelsea pulled a goal back before the half-time through Tammy Abraham after Bayern's goalkeeper Manuel Neuer made a mistake.

"It's a good exercise for us to go up against Bayern and their Champions League experience, with a lot of our players having debut seasons," said Chelsea manager Frank Lampard.

"I can see where I want us to go and I know we'll be back," the former Blues legend added.

In the other duel on Saturday, Barcelona cruised past Serie A side Napoli 3-1 in a game in which Lionel Messi fired a brilliant solo goal and won a penalty which was converted by Luis Suarez.

Five-time Champions Barcelona took an early lead when Clement Lenglet headed in Ivan Rakitic's corner after 10 minutes, which also put the Spanish side 2-1 ahead on aggregate.

Then it was Messi's showtime. The all-time leading scorer for Barcelona wriggled past three defenders, before bending a shot between another two Napoli players and into the far side of David Ospina's goal.

The Barcelona captain could have scored another just seven minutes later, but his goal was canceled by VAR for handling the ball in controlling Frenkie de Jong's pass.

Another VAR review then awarded Barca a penalty in first-half injury time after Messi was brought down by Kalidou Koulibaly, and Suarez stepped up to score his 25th Champions League goal.

Lorenzo Insigne pulled one back from the penalty spot just before the break, after Ivan Rakitic fouled Mertens.

After finishing second in the domestic La Liga with five points off archrivals Real Madrid, Barcelona are now putting all their efforts on the Champions League as they try to win ther sixth title in the continental elite competition.

Barca and Bayern's quarterfinal showdown is scheduled for next Friday in Lisbon, Portugal and will be played as single-leg format.

"Bayern are a great opponent, they are a contender for the title, like all eight teams in Lisbon, but it is 11 against 11 in 90 minutes," the Uruguayan striker said.

The two teams' last encounter in the event was in 2014-2015 season's semifinals when Barcelona won 5-3 on aggregate including a 3-0 win at home.