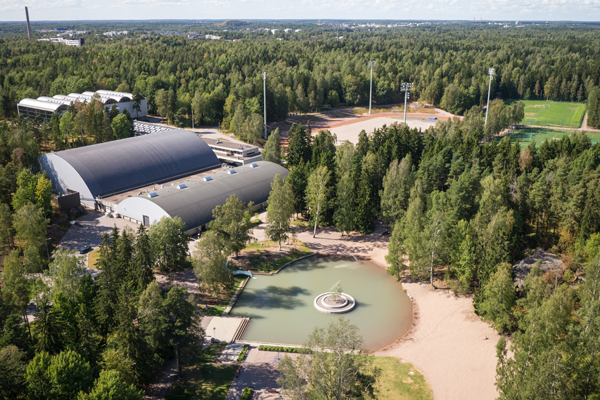 Press Release Photo by City of Helsinki by KopterCam

The City of Helsinki will build a multi-sports hall in the Pirkkola Sports Park, said an official press release on Wednesday.

Earlier, in May, the City of Helsinki Culture and Leisure Committee approved a land lease in the Pirkkola Sports Park area for the sports hall company Pirkkolan liikuntahalli Oy.

The sports hall will be designed by Siren Architects, which is familiar with the design and construction of Pirkkola Sports Park and the sports site.

The goal of the design is to have a safe and an energy-efficient building with a low lifecycle cost. The goal can be achieved with sufficient safety areas in fields, with the right material choices and with contemporary building technologies, as well as by designing the property to be easy to maintain and to manage.

The proposed development of a new sports hall in the Pirkkola Sports Park has triggered a discussion. Questions have been raised, especially about the proposed location of the sports hall and the additional parking spaces required by the hall, as well as about preservation of the surrounding nature.

There has been growing demand for sports halls and for indoor sports facilities for various sports and sports groups for an extended time in Helsinki. Demand for such facilities will grow further as the population and the number of users increase in Helsinki City and the entire Helsinki metropolitan area. Increases in the total population, the number of different sports, sports societies, and users will generate growing demand for various sports facilities and sites, said the release.

New indoor sports facilities, including those for ball games, to be built in the Pirkkola Sports Park area or in the vicinity of the area have been discussed repeatedly in Helsinki over the last few decades. Various proposals have been presented, accompanied with surveys of alternatives for new sports facilities to be developed in nearby areas and in various parts of the sports park. The recognised benefits of the Pirkkola Sports Park for the development of new sports facilities comprise synergies produced by the existing sports services and facilities, the possibility to create a versatile sports complex, and good accessibility owing to the location of the sports park and the local transport connections.