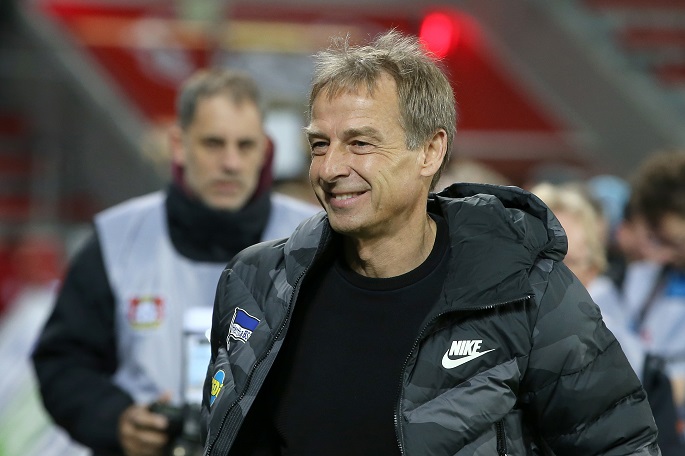 Ten years after his unhappy dismissal, Juergen Klinsmann to meet again what is seen as his darkest hour in football. As Hertha BSC's new coach, the former German national coach and 108 times capped former German international is, for the first time, crossing swords with his former club (as player and coach) Bayern Munich.

The Bundesliga's top act this Sunday is attracting the most attention in the German media with stories about the troubled relationship between the Bavarian club and one of Germany's most prominent footballers.

Ahead of the exaggerated clash, reports came to light that Klinsmann's coaching license has expired. "No one asked me about my license over the past years. Not in the U.S., not around the German national team. The case seems initiated by some people who are interested in headlines," Klinsmann commented, adding things will get solved shortly.

Leading papers describe Klinsmann's goals as ambitious and call them twisted and pretentious.

Football protagonists in Germany are puzzled over the question of why Klinsmann is facing such a vast amount of mistrust.

Monday, April 27, 2009, might have been one of the darkest days for Klinsmann. The Saebener Strasse in Munich, right in front of Bayern Munich's headquarter, was crowded with TV units and media. The last picture of a man escaping from the place he failed to achieve the promise of the best business options.

Klinsmann's pioneer spirit was at odds with Bayern's cautiousness, which saw the break down in the relationship between him and the club.

The coach Klinsmann seemed done for all times, at least when it came to German football.

Klinsmann has always been eyed as a critical spirit, mainly considering his benefit. To entirely turn things up-side-down seems contradictory to German traits that are mostly based on usual practice.

With the German honorary captain moving to the U.S., the gap widened as the former striker took up what is seen as overexcited big thinking and began to anglicize his language.

Klinsmann initiated most innovations that German football has counted on since his time as a national coach (2004-2006). New training methods, including input from all sorts of different other sports, have inspired German football.

Klinsmann won eight points in five games with Hertha despite having to face top dogs like Leverkusen, Dortmund, and Moenchengladbach. His conclusions, relegation is not about enchanting football; it is about points and pragmatic football.

"I wouldn't see him as Hertha's coach, but as a project manager," Germany's record international Lothar Matthaeus said. The 58-year-old is convinced Klinsmann is leading the Berlin club to new heights.

Former Bayern and Liverpool professional Didi Hamann is convinced Klinsmann is a winner. "He was successful everywhere he played and coached. He has shares when it comes to the success Joachim Loew harvested as German national coach in the years after 2006," the 46-year-old said.