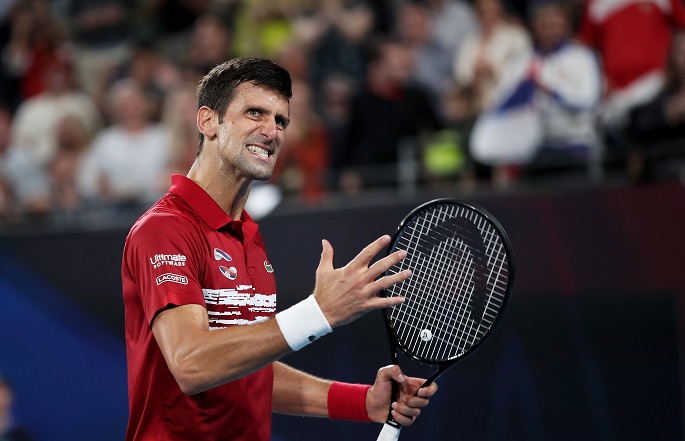 Novak Djokovic of Serbia reacts while competing against Rafael Nadal of Spain during the ATP Cup final between Spain and Serbia in Sydney, Australia, Jan. 12, 2020. Photo Xinhua.

Serbia defeated Spain to claim the inaugural ATP Cup in Australia on Sunday, with the matchup between Novak Djokovic and Rafael Nadal a turning point in the 2-1 result.

It all came down to the doubles decider, and despite a spirited performance and early lead by the Spanish, Serbia surged to the victory, 6-3, 6-4, in the final clash.

Nadal was notably absent from the doubles, being apparently worn out having played a grueling tournament schedule across multiple cities.

Earlier in the night, Spain's Roberto Bautista Agut defeated Dusan Lajovic, 7-5, 6-1, to put his country one point ahead in the three-match tie.

However, Nadal was unable to clinch the victory for his country, going down to Djokovic, 6-2, 7-6, and forcing the championship to a doubles decider.

Djokovic returned to the court for the doubles, pairing up with Viktor Troicki, while Feliciano Lopez and Pablo Carreno Busta stepped forward for Spain, leaving Nadal to watch from the sidelines.

Such was the spirit in the arena that a Serbian victory seemed preordained -- and national hero Djokovic did not disappoint -- leading his team to a straight-set victory which he described as one of the most unique experiences of his career.

"I'm being fully honest, I've never experienced the atmosphere on the tennis court like this," Djokovic said.

"I'll remember this moment for the rest of my life, it's one of the nicest moments of my career for sure."

While Serbian supporters dominated the crowd, Djokovic dominated the court, cementing himself as one of the most exciting players in the world, and the ATP Cup as an exciting new tournament.

The maiden ATP Cup was heralded as a success, delivering high tension tennis from the world's masters.

"There is only one way to go from here and that is to really go upwards and to make this event as best as possible in our sport," Djokovic said.