China-Finland vow to keep cooperation on 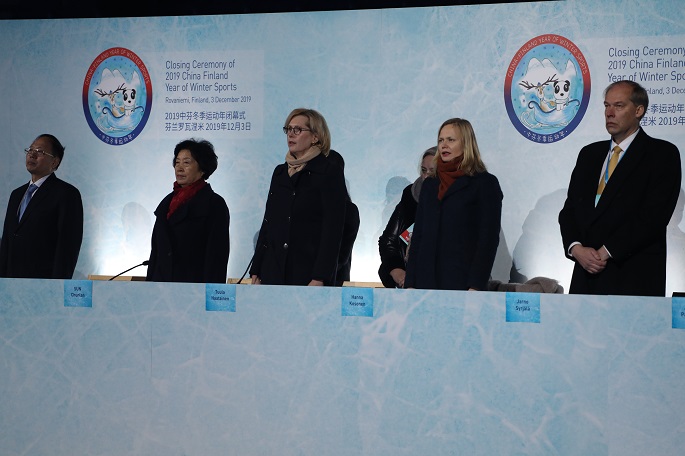 Photo Source : Ministry of Education and Culture by Juuso Toivola.

Minister of Science and Culture Hanna Kosonen and Chinese Vice Premier Sun Chunlan took part in the closing ceremony, said a press release issued by the Ministry of Education and Culture.

Before the ceremony, at an exhibition held in the Lappi Areena foyers, spectators could learn about the winter sports and cultures in the two countries.

“China-Finland Year of Winter Sports 2019 has been a stepping stone for the future, filled with many events and enriched by our cooperation. In particular, the Year of Winter Sports has focused on training and coaching cooperation, ethical themes, sustainable development, tourism and the development of competitive and elite sports,” said Minister of Science and Culture Hanna Kosonen.

“Although this year is coming to an end, cooperation in the field of winter sports will continue towards the 2022 Beijing Winter Olympics and Paralympic Games, and over the next Olympiad,” Kosonen added.

The year 2019 was designated as the China-Finland Year of Winter Sports at the meeting of the Finnish and Chinese presidents in spring 2017.

Finland is the first country with which China has agreed on cooperation in winter sports similar to this year, so it has been a historic form of cooperation for both countries.

Preparations for the Year of Winter Sports and the 2022 Beijing Winter Olympics have increased China's interest in Finnish expertise in winter sports, both in coaching and in commercial terms.

The Year of Winter Sports was made up of 62 events, including the celebrations of the Chinese New Year in Finland in February, the World Championships in women's ice hockey and in synchronised skating in April, to which China sent a team for the first time in the history of figure skating.

At the World Winter Sport Expo held in Beijing in October, Finland was the Major Honoured Guest Country. Almost 40 Finnish organisations exhibited Finland's expertise in winter sports at the Expo.

Other events included science and research conferences in fields such as sports physiotherapy, and the introduction and implementation of the Finnish Schools on the Move action plan in China.

“When planning the calendar of events for this year, we agreed to focus on the following themes: coaching and training skills, sustainable development and accountability, tourism, elite sports, and business cooperation. We are very pleased that we succeeded so well in meeting this goal,” said Kosonen.

The most rapid development was seen in the collaboration between athletes and in the coaching cooperation between Finland and China. Long-term plans have already been made not only for the Beijing 2022 Games, but also for the next Olympic Games after them.

In order to move forward with the Year of Winter Sports, Finland and China set up a joint working group, which met six times at the deputy ministerial level in 2018 and 2019. At the last meeting, the working group also agreed on the next steps for the cooperation. At the end of the Year of Winter Sports, the countries will continue to work in collaboration in the coming years towards the Beijing 2022 Games.

On the road to the Beijing Winter Olympics and Paralympic Games, cooperation between the countries will continue in all previously agreed areas.