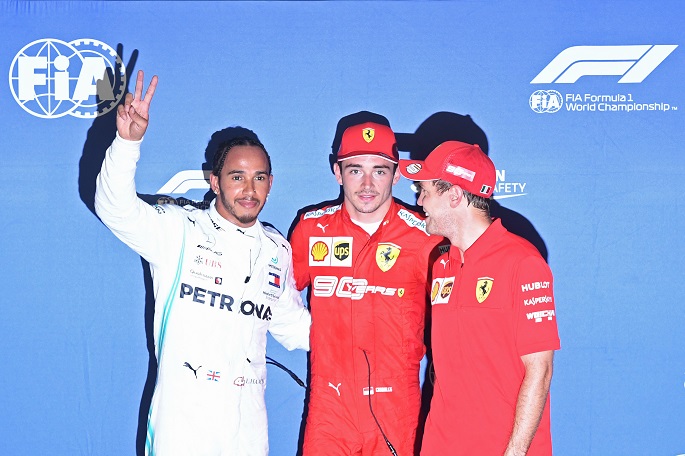 Monacan driver Charles Leclerc (C) of Ferrari celebrates with British driver Lewis Hamilton (L) of Mercedes and German driver Sebastian Vettel (R) of Ferrari after snatching pole position during the qualifying session of the Formula One Singapore Grand Prix held at the Marina Bay Street Circuit in Singapore, on Sept. 21, 2019. Photo Xinhua by Then Chih Wey.

Charles Leclerc took his third consecutive Formula One pole position for a revitalized Ferrari team in qualifying for Sunday's Singapore Grand Prix, with Mercedes' Lewis Hamilton alongside him on the front row.

Much of the debate coming into the weekend centered on whether Mercedes or Red Bull would emerge victorious in Singapore, with the twisty confines of the Marina Bay Street Circuit not thought to suit the Ferrari package. But a post-Monza raft of updates has enabled the Scuderia to steal a march on its rivals, enabling Leclerc to seal pole with a time of 1:36.217.

"It was quite a crazy lap," Leclerc said afterwards. "I gave it all and there were quite a few mistakes - I lost the car a few times and I could see myself in the wall two or three times. To come here and qualify on pole position feels absolutely amazing."

The 21-year-old's achievement was all the more impressive after gearbox woes had limited his running in Friday practise. After having also tasted victory at the previous two rounds in Belgium and Italy, the Monegasque is F1's man in form and will be gunning for a pole-to-win hat-trick at Singapore.

Behind Leclerc, Hamilton appeared content with second place and may yet be in with a good chance of victory, with the Mercedes having shown well on race simulation runs earlier in the weekend.

"I don't know where Ferrari picked up their pace from but they did a great job," acknowledged the Briton. "I gave it everything I had and I'm very happy to be on the front row."

Leclerc's teammate Sebastian Vettel had to settle for third after setting the initial pace in Q3, with the German backing out of a scrappy final flying lap. Max Verstappen could only manage fourth in his Red Bull on a track that the drinks-backed outfit was expected to show well on. Hamilton's teammate Valtteri Bottas took fifth, ahead of Verstappen's teammate Alex Albon.

The McLaren of Carlos Sainz took an encouraging seventh spot just 0.4s shy of Albon's time, despite a momentary loss of power at the beginning of the session. The two Renaults were eighth and ninth, with Daniel Ricciardo edging Nico Hulkenberg, and Sainz's teammate Lando Norris rounded out the Q3 participants.

Behind the top ten, Sergio Perez was best of the rest in his Racing Point, though the Mexican will start 16th having incurred a five-place grid penalty for a gearbox change after clouting the wall earlier in the day. Antonio Giovinazzi therefore moves up to 11th in his Alfa Romeo, with Pierre Gasly's Toro Rosso just 0.002s behind in 12th.

Giovinazzi's teammate Kimi Räikkönen lines up 13th after a messy qualifying session in which he had to make a precautionary pit stop after nudging the wall with his front-left wheel. The Haas of Kevin Magnussen will start alongside Raikkonen in 14th spot.

The drivers eliminated in Q1 were headed by Daniil Kvyat in the Toro Rosso, who starts 15th. Lance Stroll will line up behind his teammate Perez in 17th, with the Canadian radioing his team early in the session to say that he too had brushed the wall a couple of times.

Romain Grosjean took a disappointing 18th in his Haas, and the final two spots on Sunday's grid will be occupied by the two Williams cars, with George Russell taking his customary slot ahead of Robert Kubica.