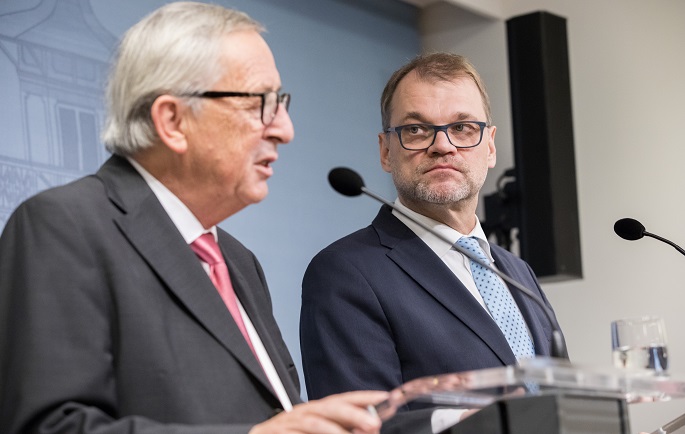 Prime Minister Juha Sipilä and European Commission President Jean-Claude Juncker in a meeting on Thursday agreed that strengthening a rules-based international system of trade must continue to be a top priority of the EU’s trade policy.

The meeting’s agenda also included the EU’s measures in response to migration, international trade, and the development of the EU’s internal markets.

“When it comes to migration, we must focus above all dealing with the root causes and engaging in cooperation with the countries of origin. We also need more effective control of the EU’s external borders, including reform of the Common European Asylum System. During its presidency term, Finland is committed to continue with seeking a way forward in migration issues in a pragmatic and result-oriented manner,” said Sipilä.

On the EU’s trade policy Sipilä said, “The EU has to maintain its leading role in modernising the World Trade Organization (WTO). At the same time, we must work to engage the United States and China in this process.”

Among other topics, they discussed the development of the EU’s defence cooperation and preparedness for hybrid threats, the status of Brexit negotiations, cooperation between the EU and Africa, climate issues, and the EU’s new multiannual financial framework.

The discussions were part of a series of meetings leading up to Finland’s term as the president of the Council of the European Union, before which Sipilä will meet with the heads of government of all the EU Member States.