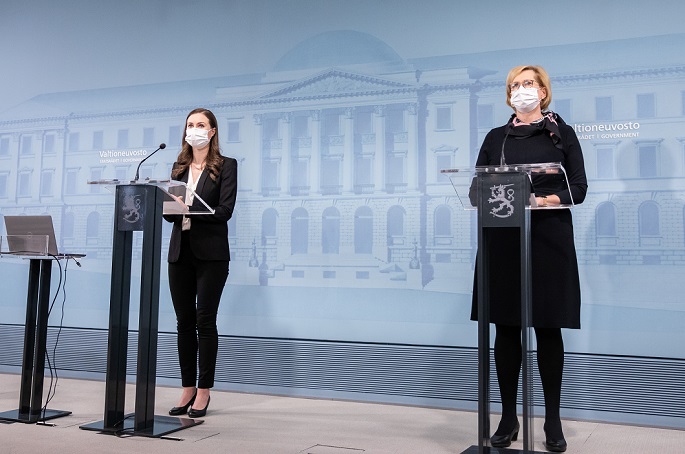 Prime Minister Sanna Marin and Minister of Employment Tuula Haatainen spoke at a press conference on government decision of declaring a state of emergency on Monday. Photo: Finnish government by Lauri Heikkinen.

The Government, in cooperation with the President on Monday declared a state of emergency in Finland against the backdrop of the worsening coronavirus situation.

Prime Minister Sanna Marin made the announcement from a press conference in the afternoon where she said that the state of emergency was declared in collaboration with President Sauli Niinistö.

Earlier, in the morning the government in its plenary session finalized the decision that the country is in a state of emergency as referred to in section 3, paragraph 5 of the Emergency Powers Act.

The state of emergency will enter into force immediately and will remain in force until it is repealed.

Section 3, paragraph 5 of the Emergency Powers Act states that a widespread outbreak of a serious infectious disease, the effect of which is comparable to a major disaster, meets the definition of a state of emergency.

The number and incidence of COVID-19 cases in Finland have risen very rapidly since the beginning of February 2021. The number of infections caused by new virus variants has clearly increased, which may further accelerate the epidemic and place significant strain on hospital and intensive care capacity if we are unable to bring the number of infections down.

At this stage, there is no immediate need to adopt the powers laid down in Part II of the Emergency Powers Act, which restrict the fundamental rights of citizens, but the need to introduce them will depend on how the epidemic progresses in the near future.

Meanwhile, immediately after declaring the state of emergency, the Government submitted a proposal to the Parliament for bringing amendment to the respective law to temporarily close restaurants and other food and beverage service businesses to customers for three weeks.

The act would enter into force on 8 March and remain in force until 28 March.

During that time, meals could still be sold to customers for takeaway and delivery.

The closure would apply to food and beverage service businesses in areas where the COVID-19 epidemic is in the acceleration or community transmission phase. Staff restaurants and other restaurants not open to the public would be exempt from the closure. Separate provisions on the areas of application will be laid down by government decree.