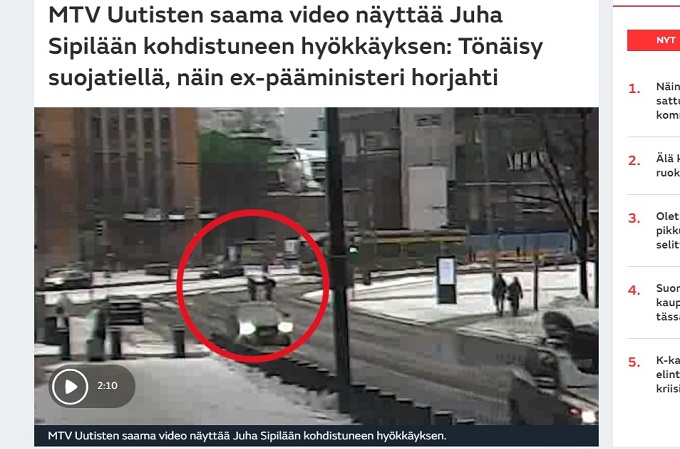 A snapshot of the MTV news on the video footage on attack Juha Sipilä. DF Photo.

The Chancellery Committee of the Parliament has decided to review the incident of the leakage of the video footage of the attack on former prime minister Juha Sipilä captured by the security surveillance cameras of parliament.

Parliament completed the investigation into the incident of the disclosure of the footage to public through news media on Tuesday and decided to discuss about further course of action in this regard next week, said parliament in a press release on Tuesday.

On 18 February, parliament’s Security Director Jukka Savola submitted a report to the committee, in which he admitted that he handed the footage over to the media, added the press release. Savola in his report said he gave the footage as a number of media houses wanted to see it from the surveillance camera recordings.

“According to the Public Access to Information Act, as the director of parliamentary security, I have the discretion to decide whether and to what extent confidential information may be disclosed,” the national broadcaster Yle quoted Savola as saying in his report.

He also said that the requested footage could be handed over as it did not endanger the security of parliament.

Sipilä, a lawmaker and former chief of the Suomen Keskusta (Centre Party of Finland) came under attack in front of the parliament building on 7 January.

One person approached Sipilä and knocked him down, when he was walking over a pedestrian crossing in front of parliament.

The police located the suspect during the investigation but are yet to unearth the motive of the alleged attack.

The incident was captured by surveillance cameras in the vicinity of parliament buildings.

Earlier, a case of alleged assault was lodged with the police in connection with the incident and the police completed the preliminary investigation into the alleged assault and will forward it to the Office of the Prosecutor for consideration of charges.