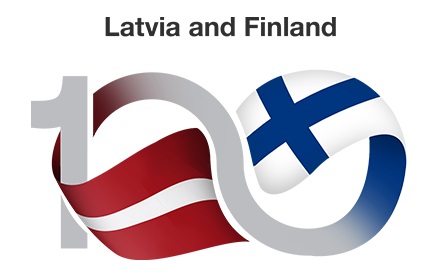 Photo: Embassy of Latvia in Helsinki.

Finland and Latvia marked the 100th anniversary of the establishment of diplomatic relations between the country on Tuesday, said the Ministry for Foreign Affairs in a press release.

A multitude of special events will take place in Finland and in Latvia throughout this year to commemorate the occasion.

The foreign ministers of the two countries, Pekka Haavisto and Edgars Rinkēvičs, celebrated the anniversary by posting a joint message on the Twitter messaging service.

A live discussion on the ties between Finland and Latvia in the inter-war period will be hosted by the Latvian Embassy in Finland on its Facebook website on 4 February 2021.

The event will be opened by the foreign ministers of the countries.

On the same day, the University of Oulu, Finland, will host a virtual seminar on the relations between the countries in the early 1900s and in the inter-war period.

As the other Nordic countries will similarly be celebrating the 100th anniversary of their diplomatic relations with Latvia in early February, joint Nordic celebrations will be held in Riga within the limits imposed by the current coronavirus situation.