Slipping accidents most common for 60+ people 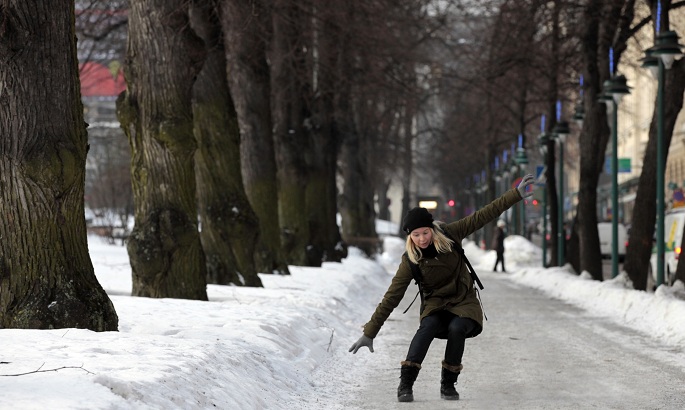 Slipping is most common during the winter months, most often resulting in a knee, shoulder, wrist, ankle, or head injury, according to the findings of a survey.

Slipping accidents are especially common among people aged over 60, for whom injuries are also most frequently compensated, said the survey conducted by Pohjola Insurance.

More than 40 per cent of Finns go about their daily lives mainly by walking. They should now exercise special care, as most falling and slipping accidents occur during the winter months, said the survey.

According to Pohjola Insurance’s statistics, falling most commonly results in a knee, ankle, wrist, shoulder, or head injury. Knee injuries are the most common types of falling injuries throughout the year, while shoulder injuries increase during the winter months and ankle injuries decrease.

“Injuries caused by slipping increase during the winter months.  The winter in southern Finland was very mild last year, which also showed as a lower peak in the number of falling accidents reported to us,” said Pohjola Insurance Claims Settlement Director Sari Styrman.

Falling accidents correlate with age, except for small children. Compensations are mostly paid to older policyholders, and there is a peak in statistics for people aged 61–70 years. The average amount of the claim in euros is also higher for older people.

Of the costs in euros resulting from injuries caused by a fall, the most common item that Pohjola Insurance has compensated in the last few years is surgeries, the average claim being several thousand euros.

In terms of numbers, compensations are mostly paid for medical and specialist consultations.

“Insurance brings security even here, although the most important thing is to be careful and to prevent accidents when walking, etc. Older family members would benefit from studded shoes and having someone accompany them when going for a walk in slippery conditions, for example,” Styrman pointed out.

“With respect to small children, parental concern is apparent and it is likely that reports are mostly made just in case. Of course children also fall from a lower height, which prevents any serious injury,” added Styrman.