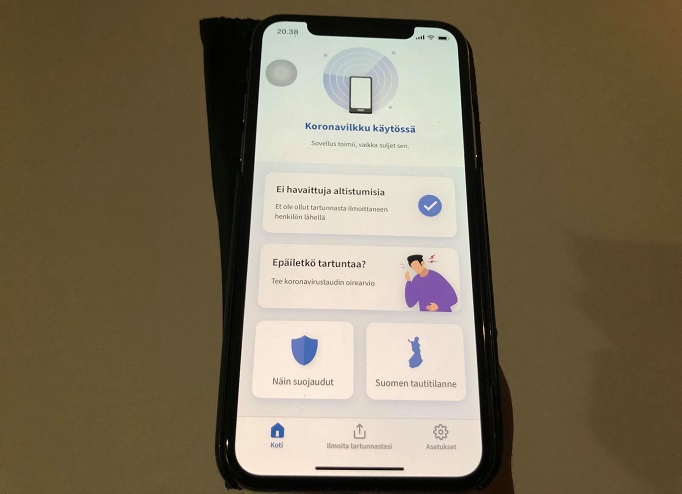 Designed to help break infection chains, the Koronavilkku app has been downloaded more than two million times, said the Finnish Institute for Health and Welfare (THL) in a press release on Thursday.

The milestone of 2 million downloads was reached two weeks after the application became available for download in app stores.

‘We all now have a genuine opportunity to help break the chains of infection, because so many of us have started using Koronavilkku. In addition to this, we must remember to prevent the spread of coronavirus by, for example, maintaining good hand hygiene and safe distancing and using face masks in the recommended way,’ said, of THL Information Services Director Aleksi Yrttiaho.

So far, 218 Koronavilkku users have sent infection notifications. Users can report that they have been infected by entering a single-use unlock code that the application user receives from a healthcare professional responsible for infection tracing. The application then passes this information on to those who may have been exposed to the infection.

The unlock code is only given to a person with a laboratory-confirmed coronavirus infection. The unlock code is used to ensure that the Koronavilkku warnings are only based on proven infections. The recipients and the sender of the warning are not informed of each other's identity.

Between 1 September and 15 September, 35% of the people diagnosed with coronavirus infection used the application to report the infection.

‘It is easy to be proud of Finns, because here we are setting an example for the rest of the world. We Finns have shown that we can take responsibility together for breaking the chains of infection. Our next goal is to further increase the application’s coverage,” said, of the Solita Health and Wellbeing Division Director Risto Kaikkonen.

Launched on 1 September, the app is available only in Finnish and Swedish but an English version will be published later in this autumn.

The app works on newer smartphones. It uses the Exposure Notifications interface developed by Apple and Google to create identification codes and information on contacts.

This interface is available on all iPhones running iOS 13.5 or higher, android phones running Android 6.0 or higher (Marshmallow), and Google Play.

Consequently, Koronavilkku is not available for older smartphones or android phones with no access to Google Play services.

android phones with no access to Google Play services.