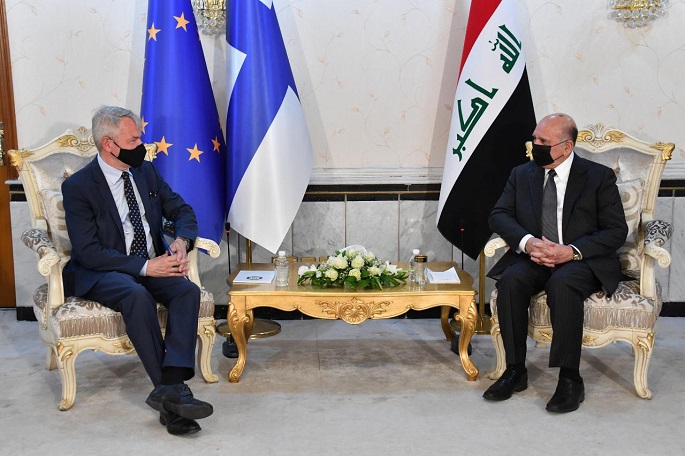 Foreign Minister Pekka Haavisto on Thursday held meetings with top Iraqi officials over means to boost bilateral relations and the reopening of his country's embassy in the Iraqi capital after 30 years of closure, reported Xinhua.

Iraqi Foreign Minister Fuad Hussein welcomed the reopening of the Finnish Embassy in Baghdad at a joint press conference.

"Finland has offered assistance to Iraq in its war against the Islamic State. It is helping us in rebuilding the war-ravaged areas and provides assistance to confront the pandemic," Hussein told reporters.

During his meeting with Iraqi Prime Minister Mustafa al-Kadhimi, the visiting Finnish minister conveyed Finland's great expectation of Iraq's balanced relations with its neighbors, the region and the world, according to a statement by prime minister's media office.

Haavisto also highlighted his country's desire to build the best relations with Iraq, and to enhance cooperation between the two countries in various fields.

Al-Kadhimi praised Finland's positive stances in supporting Iraq in the political, economic and security fields, and expressed Iraq's desire to continue security cooperation with Finland within the international coalition against terrorism, according to the statement.

The Finland's top diplomat arrived in Baghdad on Wednesday night on an official visit to discuss bilateral relations between the two countries.