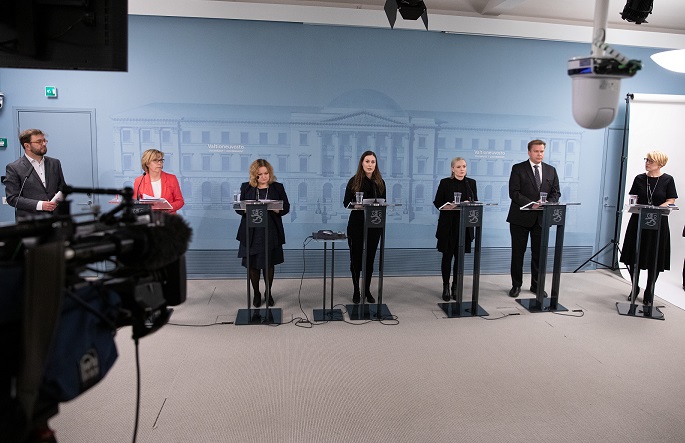 The government on Wednesday decided to restrict traffic between the Region of Uusimaa (Helsinki and adjoining areas) and other regions of the country. Photo Finnish government by Lauri Heikkinen.

The government on Wednesday decided to restrict the traffic between Uusimaa (Helsinki and its adjoining areas) and other regions of the country from March 27 Friday to April 19, said an official press release.

The purpose of the new restrictions is to prevent coronavirus infections and to slow down any spread of the epidemic from Uusimaa to other parts of Finland.

The government on Wednesday submitted to parliament a decree concerning the use of powers under the Emergency Powers Act relating to the restrictions on movement of people.

After the movement restrictions enter into force, the residents of Uusimaa must stay in their own region. On the other hand, residents of other regions will also not be allowed to visit Uusimaa.

However, everyone has the right to return to their home or place of residence, but recreational travel will not be allowed.

The flow of goods will not be prevented even under the new restrictions. Furthermore, the restrictions do not apply to any movement within Uusimaa.

Movement is permitted in official activities and in work-related travel, whether as an employee or as an entrepreneur or self-employed person, or in connection with a position of trust or a statutory obligation.

Movement will not be restricted if there are compelling personal reasons, such as the right of access to a child or the death of a family member.

The police will monitor the compliance with the movement restrictions. The police may impose a fine for violating or failing to comply with the restrictions. At the request of the police, people must provide an account of the reason or purpose of their travel.

More information regarding the movement restrictions and their practical effects will be provided at bus, train, metro and tram stations and terminals as well as on information boards and announcements made on trains and buses.

The information must also be available in Uusimaa’s neighbouring municipalities and in key transport locations used for cross-regional commuter traffic.

News agency Xinhua adds: The Uusimaa region is currently epidemic centre of COVID-19 in Finland,  according to Finnish National Institute for Health and Welfare (THL). As of Wednesday, 561 of the 880 confirmed cases were in Uusimaa.

Commuting to jobs will be allowed, as well as necessary travel for family affairs, but others like leisure travel in and out of Uusimaa region will not be permitted.  Interior Minister Maria Ohisalo said at the press conference that the police would supervise.

Krista Kiuru, Minister of Family affairs and Social Services, said the epidemic has been fast in Uusimaa, and that with the restrictions, the same rate of spread will not be repeated in the rest of the country.

Marin on Wednesday also appealed to the restaurant industry in Finland  to close voluntarily as the legislation to enforce the closing was delayed. Parliamentary committees on Wednesday asked the cabinet to submit further details making a mandatory closing from this Saturday possible. Marin has earlier described the Finnish legislative process as stiff.

THL said on Wednesday that the number of confirmed novel coronavirus cases in Finland had risen to 880. As of Wednesday, Finland had carried out around 13,000 tests. Two people have died in Finland from the virus in the last 24 hours, according to THL.