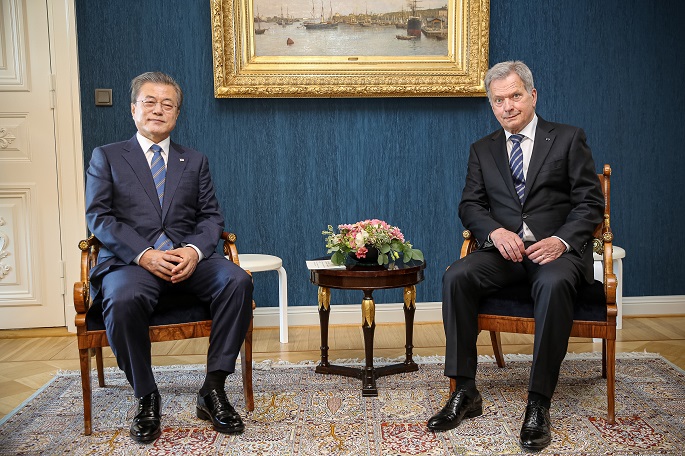 President Sauli Niinistö said Monday that Finland is ready to offer support for the peace process on the Korean peninsula.

Niinistö made the remarks here at a press conference together with South Korean President Moon Jae-in, who is in Finland for a two-day state visit.

During the Finnish presidency in the European Union, which will start in July, "ways of how to support the peace process on the Korean peninsula will certainly be discussed," Niinistö said.

Answering a question about the possibility of a third meeting between U.S. President Donald Trump and Democratic People's Republic of Korea leader Kim Jong-un taking place in Finland, Niinistö said there are "no specific proposals for the time being."

Moon expressed his gratitude for the support Finland has given to the peace process on the Korean peninsula, while Niinistö described the peace process there as "very demanding" and said Finland gives great value to the work of Moon in attaining peace.

Also on Monday, the two sides signed protocols related to "talent boost" cooperation, which will facilitate exchange of talent in a wide range of areas.

Both Niinistö and Moon will address a business forum here Tuesday.