More than enough vaccines for adults U-30s in UK 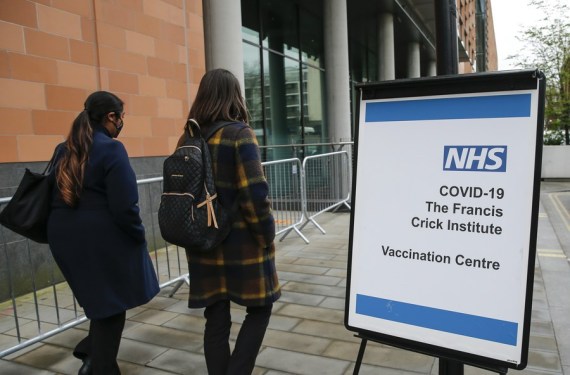 His remarks came after the British government's vaccination advisory body said Wednesday that Britons aged 18-29 will be offered an alternative to the Oxford-AstraZeneca vaccine amid concerns over its possible link with reported rare cases of blood clots.

Hancock told the BBC that Britain is still on track to vaccinate all adults by July 31.

The AstraZeneca jab remained safe and those who had received one dose should take up their second when they are called, he said.

There was "no evidence" of rare blood clots after the second dose of the vaccine, he said.

"The safety system that we have around this vaccine is so sensitive that it can pick up events that are four in a million (the chance of developing a rare brain blood clot) -- I'm told this is about the equivalent risk of taking a long-haul flight," he said.

Britain's Medicines and Healthcare products Regulatory Agency (MHRA) said Wednesday that the side effects of the AstraZeneca vaccine were extremely rare and the vaccine's effectiveness is proven, adding that the benefits of taking the vaccine are still very favourable for the vast majority.

Deputy Chief Medical Officer for England Jonathan Van-Tam has said that because of the supply situation with other vaccines, the effect on the vaccination program in Britain should be "negligible".

Currently, Britain is also rolling out the Pfizer jab, and the first doses of the Moderna vaccine were administered Wednesday in Wales.

The country also has supply agreements with several other companies that are still waiting for approval, including Valneva and Janssen.

More than 31.7 million people have been given the first jab of the coronavirus vaccine, according to the official figures.

To bring life back to normal, countries such as Britain, China, Russia, the United States as well as the European Union have been racing against time to roll out coronavirus vaccines.