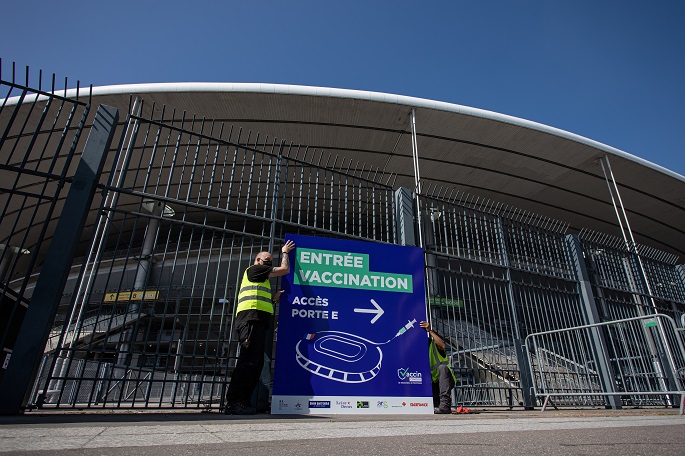 Staff members set up a sign of a new COVID-19 vaccination center in Saint-Denis, France, on March 31, 2021. File Photo: Xinhua.

The French government on Tuesday opened a giant vaccination center in the 80,000-seat Stade de France, the national stadium located in the northern suburbs of Paris, to step up vaccine rollout and provide relief to overwhelmed hospitals, reported Xinhua.

"We accelerate vaccination. ... The center will vaccinate around 10,000 people per week," said Prime Minister Jean Castex during a visit to Stade de France, which hosted the World Cup final in 1998.

As part of its plan to speed up its vaccination program, the French government aims to open about 40 mass vaccination centers this month, and allows shots to be administrated in doctors' offices and pharmacies.

To date, over 9.5 million people in France have had at least one vaccine dose, accounting for 18.1 percent of the adult population, and 3.2 million others have completed their inoculation with two doses, according to the Health Ministry's daily figures.

"We are in a very difficult moment with this third wave," Castex said, stressing the importance of vaccination. "It is thanks to vaccination that we will overcome this terrible crisis."

On Tuesday, the number of COVID-19 patients who required life support rose by 193 to 5,626, above the peak of 4,919 reported in November 2020, when the country went into the second lockdown to contain the epidemic, health authorities data showed.

With 732 new admissions in the past 24 hours, the biggest daily jump in nearly five months, hospitalizations reached 30,639, passing the 30,000 mark for the first time since Nov. 24.

Deaths caused by COVID-19 increased by 426, while the number of infections was up by 8,045. In total, over 4.84 million people have caught the flu-like illness since the epidemic outbreak, and 97,273 of them have lost their lives.