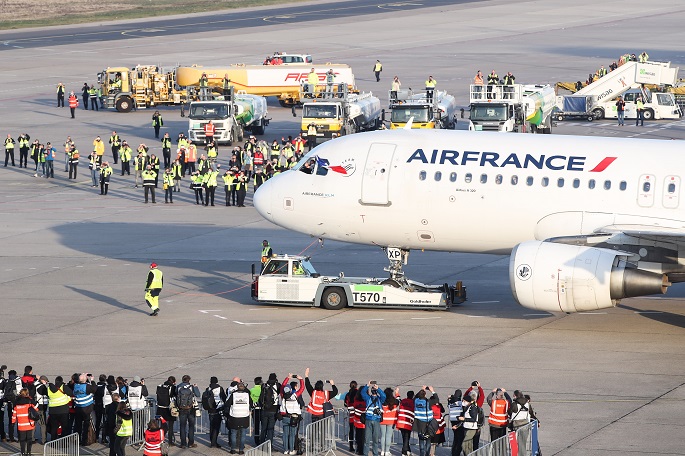 Europe's leading airline Air France-KLM, hit hard by the coronavirus pandemic, on Tuesday unveiled a recapitalization plan for its French arm, in which the French government will become its biggest stakeholder, reported Xinhua.

Under the deal with the European Commission, the French government would inject 4 billion euros into Air France, the country's main flag carrier to help boost its capital.

The French government will convert a 3-billion-euro loan extended to the group last year into a hybrid instrument and commit up to an additional 1 billion euros to a planned share issue.

Following the capital raise operation, the French state, which owns 14.3 percent of the group's stake, will more than double its capital to 30 percent to become Air France's main stakeholder.

In an interview with France Inter radio early Tuesday, Bruno Le Maire, Minister of the Economy, Finance and the Recovery, called the deal "good news" and "a strong sign of commitment to the airline and its employees."

In return for Brussels greenlight, Air France will give up 18 take-off and landing slots at Orly, Paris's second-largest airport after Charles de Gaulle, Le Maire said.

The Dutch government which holds 14 percent of the share capital would not take part in the capital increase, but it is continuing discussions with the European Commission on potential capital-strengthening measures for KLM, said Air France-KLM in its press release.

It added that "China Eastern Airlines intends to participate while keeping its stake strictly below 10 percent of share capital, as part of further reinforcement of strategic cooperation with the Group."

Additional measures to further strengthen the balance sheet are currently under consideration with several steps to be taken before the 2022 Annual General Meeting.

"Today's announcement demonstrates both the strong commitment of the French State and the renewed support of the Dutch State to help the Group weather this pandemic and this crisis," said Anne-Marie Couderc, Chair of Air France-KLM Board of Directors.

"The commitment of our long-standing partner China Eastern Airlines to participate in the forthcoming capital increase also highlights resolute confidence in the strengths and prospects of the Air France-KLM Group," she added.

In 2020, Air France-KLM posted a 7.1-billion-euro loss, as travel restrictions have taken a toll on global air traffic. The group expected an operating loss of 1.3 billion euros in the first quarter of 2021, due to the "surge of a third wave of the pandemic in several European countries."

Meanwhile, it estimated "a significant recovery in demand" in the summer period, assuming that acceleration in vaccine rollout in several countries would help lift restrictions on people travel.