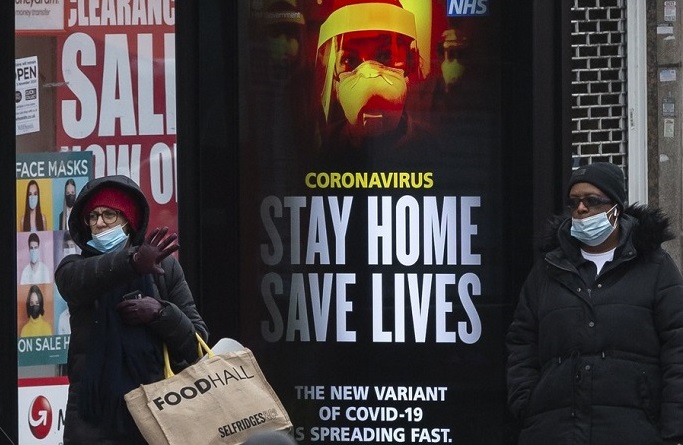 Passengers wearing face masks stand next to an advertising board reading "Stay Home Save Lives" at a bus stop in London, Britain, Jan. 10, 2021. File Photo: Xinhua.

Another 1,564 have died within 28 days of a positive test, the highest daily increase since the pandemic began in the country, according to official figures released Wednesday, reported Xinhua.

The total number of the coronavirus-related deaths in Britain now stands at 84,767, the data showed.

The previous highest daily rise of the coronavirus-related deaths was 1,325, which reported on Jan. 8.

Another 47,525 people in Britain have tested positive for COVID-19, bringing the total number of coronavirus cases in the country to 3,211,576, the figures showed.

London had the most reported deaths at 202. London mayor Sadiq Khan has confirmed that the British capital's total number of coronavirus deaths has topped 10,000.

British Prime Minister Boris Johnson warned Wednesday that there was a "very substantial" risk of intensive care capacity in hospitals being "overtopped".

The situation was "very, very tough" in the National Health Service (NHS) and the staff were under "colossal" pressure, Johnson told the Commons Liaison Committee.

The prime minister once again appealed to the public to follow lockdown rules which require Britons to stay at home and only go out for essential reasons.

Johnson also told British lawmakers that the NHS will launch a 24/7 vaccination service as soon as possible, noting "at the moment the limit is on supply" of the vaccine.

According to Yvonne Doyle, Public Health England's medical director, there have now been more deaths in the second wave of the pandemic than the first.

"With each passing day, more and more people are tragically losing their lives to this terrible virus, and today we have reported the highest number of deaths on a single day since the pandemic began," she said.

"There have now been more deaths in the second wave than the first," she said.

Meanwhile, Doyle urged Britons to minimize contact with others to curb the spread of the virus.

"About one-in-three people with COVID-19 don't show symptoms, but can still pass it on to others so it is essential that we stay at home, minimise contact with other people and act as if you have the virus."

England is currently under the third national lockdown since the pandemic began in the country. Similar restriction measures are also in place in Scotland, Wales and Northern Ireland.

The British government is only responsible for lockdown restrictions in England. The devolved governments in Scotland, Wales and Northern Ireland are responsible for their own policies in relation to public health matters.

Scotland's First Minister Nicola Sturgeon on Wednesday announced that restrictions will be further tightened in the region to curb surging coronavirus infections.

The new measures, which will come into effect on Saturday pending the approval by the Scottish parliament, include that only shops selling essential items such as clothing, footwear, baby equipment, homeware and books will be allowed to offer click and collect. It is also against the law to drink alcohol outside in public in most areas in Scotland.

Scotland went into lockdown on Jan. 5 with people only allowed to leave their homes for essential purposes.

To bring life back to normal, countries such as Britain, China, Germany, Russia and the United States have been racing against time to develop coronavirus vaccines.