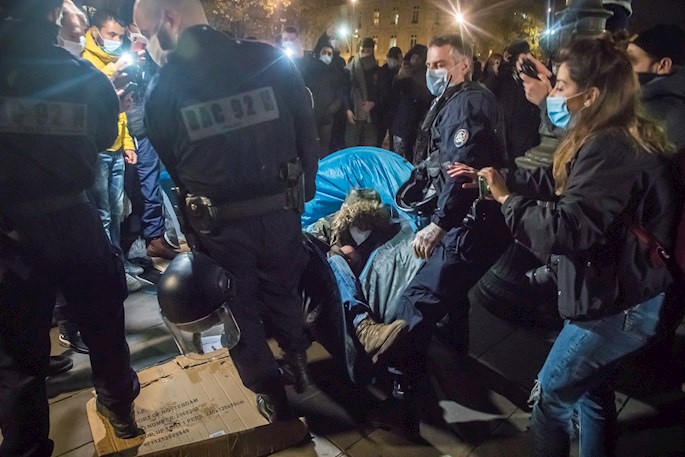 French police evacuate migrants with their tents after hundreds of migrants and refugees evacuated from a makeshift migrant camp in Saint-Denis on 17 November installed tents in Republic Square in Paris, France, 23 November 2020. Photo: EFE/EPA.

Hundreds of migrants were forcibly evacuated Monday night from the Place de la Republique, in the heart of Paris, reported EFE-EPA.

Hundreds of blue tents filled with migrants from countries such as Afganistan were dismantled by police shortly after being set up.

The scenes of tension between police and migrants were denounced by France's Minister of the Interior Gerald Darmanin on Twitter.

"Some images of the dispersal of the illegal migrant camp on the Place de la Republique are shocking. I have just asked for a circumstantial report on the events from the Prefecture of Police for tomorrow at noon. I will take action when I receive it," the minister wrote on his account.

The footage, posted on social networks, show officers forcibly removing people who were lying down next to tents, throwing the tents into trucks, confronting associations and migrants and ultimately using tear gas to disperse them.

Journalists and photographers, who were filming the event, were also victims of police intervention, according to the French press.

This eviction comes just one week after thousands of refugees were evicted from makeshift shelters in Saint-Denis, on the outskirts of the capital.

About 500 tents were set up in Place de la Republique, and those who were forced out say they were not offered any help or temporary accommodation after the evacuation.

"You cannot respond to misery with rattles. The protection of migrants from Saint-Denis camp who have remained in the streets is urgent, indispensable and indisputable," Delphine Rouilleault, director of the organisation France Terre d'Asile, said on Twitter.

Tented camps continue to pop up around Paris as it is a popular city along the migrant route through Europe, however, they don't last long as police are quick to dismantle many of these sites.