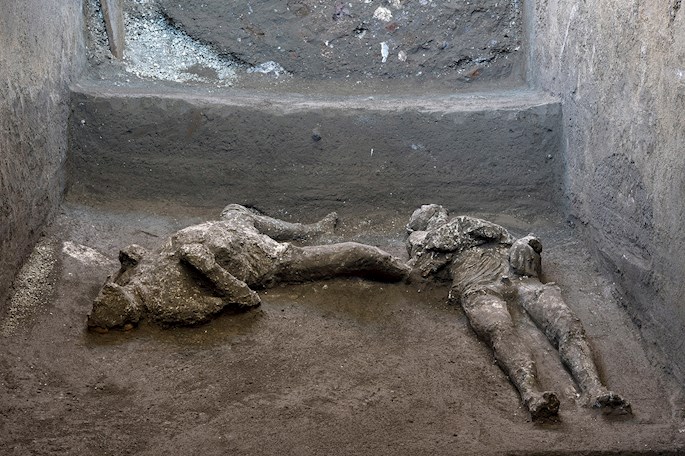 A handout photo made available by Parco Archeologico of Pompeii shows two bodies, master and slave: they are the almost intact bodies of two men, a forty-year-old wrapped in a warm wool cloak and his young slave already bent by the fatigues of life, in Pompeii, Italy, 21 November 2020. Photo: EFE/EPA/Luigi Spina /Parco Archeologico / HANDOUT.

The remains of two men, a nobleman aged between 30 and 40 and his slave, have been discovered by archaeologists in Pompei, an ancient Roman city that was destroyed by a massive volcanic eruption, the heads of the Pompeii Archaeological Park said in a statement Saturday, reported EFE-EPA.

The archeologists have reconstructed the findings in such detail that it is possible to distinguish that the first was wearing a wool cape and the second a short tunic.

The two bodies, who died when the city was engulfed in the sudden eruption of Mount Vesuvius in 79 AD, were found in a side space of the cryptoporticus, in the noble part of the suburban villa of Civita Giuliana, a majestic estate from the era of the Emperor Augustus, which boasted rooms and balconies overlooking the sea.

The land is located about 700 meters outside Pompei’s walls. It was here in 2017 that archaeologists found the remains of three horses in the stables, with their saddles and harnesses.

The cryptoporticus allowed access to the upper floor and was a space of about 2.20 high of the year but whose length is unknown for the moment, and had a wooden floor as indicated by the presence in the walls of six holes to house the beams that supported a gallery, the official statement said.

Experts used an ancient technique of making molds with plaster to reconstruct the bodies of the victims, which consists of introducing a liquid plaster into the cavities of the bone remains of the inhabitants of the ancient Roman city.

They have managed to restore the shape of the bodies and observe that the first victim was a "young man, between 18 and 23/25 years old, about 156 cm high", wearing a short tunic, and with visible signs showing that he had done "heavy work", which scientists and experts in Pompeii presume was a slave.

The second man was between "30 and 40 years old and about 162 cm high", and was wearing a long tunic or a wool cape, said the statement.

Both were in a supine position, with their hands on their chests, and with clothes that can be distinguished to the folds, a finding which the Italian Minister of Culture, Dario Franceschini, described as “amazing”.